The Shedding of Innocent Stuff: After Christmas Edition

One of the rules that we put into place last year to hopefully overcome the intense crowding of our garage, closets and other things was that this year we would make a very concerted effort to send a lot of different items to other people to do with what they will. After a day of going through closets, gathering up old clothes, books, and other items that could either be donated or junked, we came down to the requisite after Christmas Goodyear run and special pickup for the garbage company.

This year, we have a larger than normal sweep because we really made an emphasis on out with old, in with new wherever possible. We got the kids on the program with this early and they were down with it originally, but amazingly, come the day after Christmas, that resolve gave way in a hurry (LOL!). Still, after making a strong push, we managed to get to the point where there was a full car for donations: 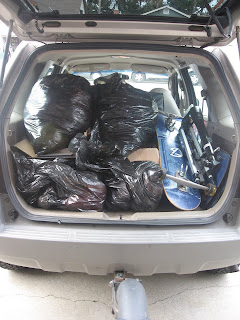 Things that didn't quite make it (along with a fairly large amount of yard cast-offs after the deck repair and repainting of the house): 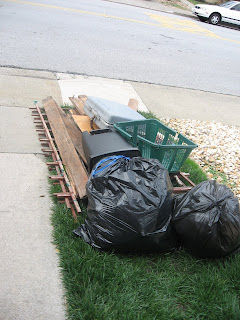 While it makes a rather large dent in the garage and elsewhere, it amazes me that there's *still* so much stuff that I know I could legitimately downsize and probably not be any worse for wear for doing so. Still, I know we have a long way to gountil we are completely clutter free, but dang it, we're sure trying (LOL!).
Posted by Michael Larsen at 2:48 PM