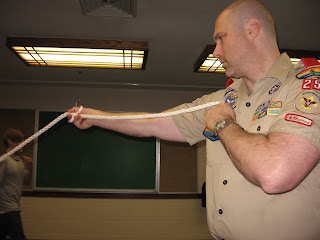 Last night was actually something of a rarity; we decided to not hold scouts due to the number of boys that were not there. However, last week we officially got underway with Nick’s Eagle Project.

His project is to hold a toy and animal needs drive, and one of the items on the animal needs list was rope toys. These are used by dogs to exercise their jaws and play with, and the cotton threads that make up the ends of the rope also act as dental floss for them.

Making the toys was fairly easy process, and one that we discovered was significantly less expensive compared to buying the same toys in a pet store. We started out with 30 feet of clean and untreated cotton rope (polyester and nylon rope cannot be used for these, as the chemicals used to make them could be poisonous). The rope was then cut into 3 foot long sections. Two overhand knots were tied towards the end, leaving about 4 inches of rope dangling from the ends. Another overhand knot was placed in the center. From there, the boys basically played tug of war with the ropes until they became good and tight. Finally, each toy was shaken out so that the ends of the rope hung free and loose.

The final products of the efforts were ten rope toys, and they will be a small part of the toys and items that he will collect for the Peninsula Humane Society, but for now, it was fun to give the boys an activity that they could directly apply to the project and have some fun doing it.

Oh, and an added bonus, we now know for real that Jamboree preparation is a reality in our household. The first payment for $300 was made yesterday. One down, eleven more to go (total bill for just Nick will work out to about $3,500, not counting what I will spent to get to Jamboree to work it). It seems funny to already be paying for an event that will be taking place in 2010, but I'm glad we are preparing and planning for it right now. This way, it will be much easier to manage, and it will all be paid for well in advance.
Posted by Michael Larsen at 5:00 AM