Proof I Should Have Stayed In Bed

I woke up Saturday Morning feeling not at all well; congested head, headachey, the whole nine yards. I'd been fighting a cold much of the week, and this time, I just felt like I'd been clubbed in the head. Still, there were a lot of things we needed to do today, and that required my actually getting up and helping out. Anyway, as we were running around yesterday, at one point my son wanted to make some Jell-O as part of dinner. I decided to give him a hand and I helped him dissolve the Jell-O packet over the stove.

Next thing we know, the phone is ringing, only the cordless phone is in the bedroom. No problem, I think, and I rush off to go answer the phone... and that's when it happened: 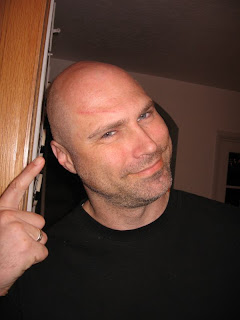 It was an accident, of course, but what happened was that the cabinet door that's overhead was let open. I should say that it is overhead for everyone except for me! Sure enough, as I was practically at a running start, I glanced the bottom of the cabinet, which opened up and caught against the side of the refrigerator... which had the net effect of me looking like I'd been hit across the head with a two by four! Needless to say, my family was rather alarmed as I dropped to the floor and clutched my head (not an entirely voluntary reaction). the next thing I knew, my son was there with ice in a plastic bag (wow, he really has been paying attention in Scouts :) ), and he was the first to say "Oh my gosh, Dad, your head!"... which doesn't exactly instill confidence at moments like this (LOL!). Fortunately, it's just a welt that will likely turn into a really vibrant bruise in a few days, but hopefully, I'll be no worse for wear from the overall experience.

Yep, I should have just stayed in bed (LOL!)
Posted by Michael Larsen at 9:00 PM