Confessions of an Anime Geek

I grew up with the first wave of Anime that became popular in the United States in the 1970's. Shows like "Speed Racer", "Kimba the White Lion", and of course "Gatchaman" (which we knew stateside as "Battle of the Planets") looked different than Bugs Bunny and Daffy Duck, or He-Man and Thundarr the Barbarian (yes, I'm dating myself here (LOL!) ), but it wasn't for several more years until I started really paying attention to the differences. Truth be told, it was my son and his school friends that brought the Anime bug back to me earlier in this decade (around 2000 and 2001). Since then, there have been many series that I have seen, become interested in, become less interested in, and finally found those that are worth viewing over and over again (and in my case, outright owning).

Thus, for your Holiday viewing pleasure, I am going to present my personal favorite of the many Anime titles that are out there. Note, these are series I'm commenting on. There are *lots* of cool one-off's out there that are awesome to see, but I generally don't buy one-off's, preferring instead to view those either through loans from the public library or video rental (maybe I'll do another post a bit later about my favorite one-offs :) ). Also, I tend to like individual storylines that have a limited run; the series that were limited to 26 or 52 episodes, all contained, rather than the serial ones that run on and on and on for a dozen years. The quality of the shows that were made for limited runs tend to hold up better and the pacing is usually much more interesting, IMHO. With that, here are my top picks:

Ghost in the Shell: Standalone Complex (and 2nd Gig) 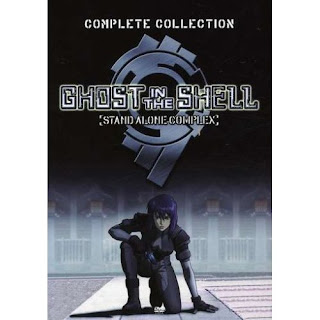 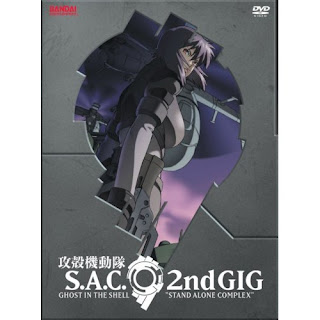 For me, these are two different stories but they take place in roughly the same time frame, so I consider them both worthy of purchase. This series is based on the late 80's/early 90's manga by Masamune Shirow, and it's a very cerebral and thought provoking series. The Wachowski Brothers, when they were developing "The Matrix", used "Ghost in the Shell" as an example of how they wanted to define the ultimate look of their movies. The storylines are based around a cybernetic future, where the line between humanity and machinery has become so blurred as to almost be indistinguishable. It's seen through the eyes (mostly) of Motoko Kusanage, a cybernetic human whos brain and part of her spinal cord are all that is left of her humanity; the rest of her is all machine. The secondary title refers to two things. First, it's the notion that individual efforts can lead up to a congruent whole all unto itself (an idea that's eplained pretty well here. It also is used to describe individual episodes in the series. Standalone Episodes are just that, meant to be watched on their own and not necessarily as part of an overall story arc. Complex episodes, however, are all meant to tie together and tell a greater story ("The Laughing Man" in the first season and "The Individual Eleven" in the second). Gang, when it comes to storytelling, immersive worlds, and a thrilling ride in animation, really, it doesn't get any better than this. Also, those who may be turned of by the "Moe" look of what is traditionally seen as the Anime style (girls with big eyes, near non existent noses, exaggerated features, etc), there is virtually none of that here. The approach is realism, and the animators at Studio I.G. do a fabulous job. In addition, the music in the series is also wonderfully integrated and enhanced due to the score by Yoko Kanno and various numbers performed by a myriad group of singers (Russian born artist Origa being one of my personal favorites). 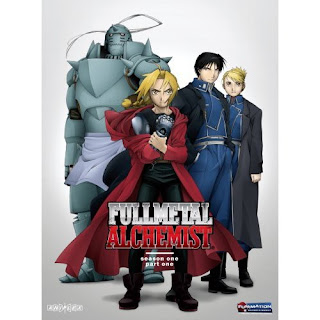 Imagine a world that split away from our own about the time of the Renaissance. Now imagine, in that parallel world, that the laws of Alchemy operate in the same way that the laws of Physics do in ours. Add to that a world about on the brink of starting their equivalent of World War I as experienced in our Earth's time frame, and you have the setting for another of the best Anime series ever (IMO), Fullmetal Alchemist. This is the story of two brothers, Edward and Alphonse Elric, the struggles they undertake to get back what they have lost, and all that happens along the way. While this show moast certanly leans to "Moe" anime stylings, and has its fair share of humor and whimsy associated with it, the overall story is a roller-coaster ride and is at times hilarious, intriguing and heartbreaking. The underlying story about how Edward and Alphonse sacrificed so much to help bring back their MOther from the dead carries through the entire series, and these choices are examined through the philosophy of "Equivalent Exchange", and how those words both inform, and haunt, their world. 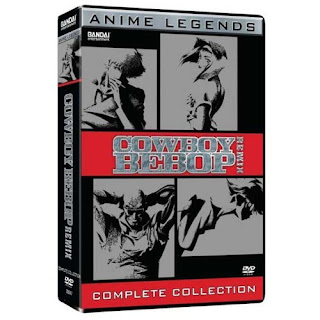 A terrific, and groundbreaking, Anime from the late 90's, this one really made an impression on me. Yoko Kanno does the music for this one, and whereas "Ghost in the Shell" is all cool techno and funk, "Cowboy Bebob" hearkens to big band Jazz as the soundtrack to an odd group of space age bounty hunters. Spike Spiegel is the rebirth of Bruce Lee in the late 21st Century, May Valentine is the wild-card gambler who always gets in trouble, Jett is the older and more war torn member of the party, often giving sage advice to others (that usually goes unheeded), and Edward is a whiz kid that can hack any computer anywhere, but she comes with her own set of weird quirks (and yes, "Edward" is a she :) ). Add to that Ein, the coolest Corgi ever to appear in an Anime, and what you get is a rollicking ride that likely to be watched again and again. 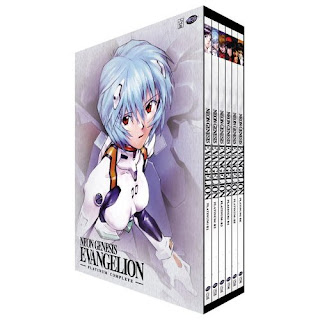 This one is heavy, no doubt about it. It's an odd mixture of cyberpunk, mecha (meaning the giant robots that are often seen as the symbol of Japanese Anime) and the blending of Kaballah mysticism into the idea that the end of the world is com ing, and humanity is facing its annihilation at the hand of "the Angels", extraterrestrial entities bent on destroying humanity. It's only line of defense is the people in the organization NERV, and the giant mechanical creatures called "EVA". The pilots of these mechanical devices? 14 year old teenagers, each with an unusual quirk or back story. This one is both renowned for a complex story as well as being an investigation into the realms of mental illness (series creator Hideaki Anno was quoted as saying that the show itself was cathartic to him and was his way of explaining how he ultimately overcame clinical depression). 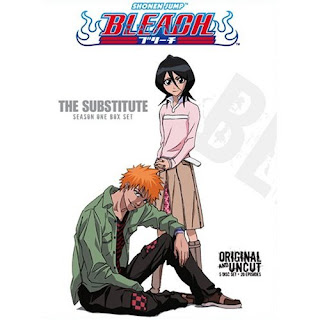 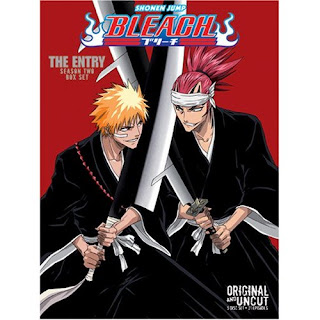 This is an example of a story that, perhaps, may prove to run too long to maintain its vitality over the long haul, but the first two seasons of this one are terrific, well paced, and both amusing and wrenching. Ichigo Kurosaki is a fifteeen year old kid who "sees dead people", or rather, can see and communicate with the spirits of those who have died. However, in Ichigo's world, there are two types of dead people. The first are called "wholes", and they tend to pass on into the next world without much trouble. the second group are called "Hollows", and these are the ones that didn't necessarily want to die, or have not come to grips with their deaths. Through rage and anger, they transform into creatures that look to prey upon the living. An afterlife army of "Shinigami" ("Soul Reapers in the English dub) helps to combat these creatures and keep the bulk of humanity blissfully unaware of their existence. It's into this batle that Ichigo finds himself becoming a "Shinigami" in his own right, a substitute "Soul Reaper". This show has now been running for several seasons in Japan, and two of those seasons are now available for purchase stateside. 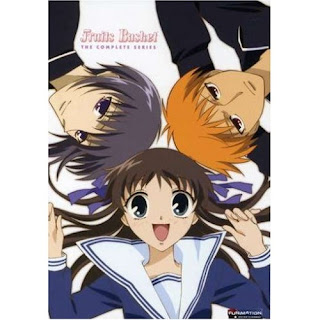 All battle, swords and tech makes Michael a dull boy. I will confess I bought this series mainly as something for my girls to watch (it's billed as a "Shojo", i.e. for girls). However, I found myself enjoying this one immensely, and when my girls ask if we can watch it again (which they invariably do every few months), I say "no problem". The story follows Tohru Honda, a fifteen year old Japanese schoolgirl who loses her mother in a car accident. Through the days, weeks and months after that tragic event, she meets the members of the Sohma family, who are a wealthy and large clan of people who share a secret... there are among the Sohma's men, women, boys and girls, who have been "cursed" to carry the spirits of the Chinese Zodiac. When they are under great stress, or when they are hugged by members of the opposite sex, they transform into the various animals of the Chinese Zodiac (plus one more, the Cat). The series revolves around Tohru meting these people, caring for them, and ultimately looking to see if she can be the one outsider to help all of the Sohma clan as they carry this curse. While this is a series that is aimed at girls, it has a charm and a quality of animation that makes it one of my favorites as well.


A note to any and all who are newcomers to Anime... in the US, animation is often seen as kids fare. In Japan, nothing could be further from the truth. While, indeed there are kids shows, many of the best Anime would be shown on telivision at 8:00 PM, 9:00 PM and 10:00 PM and be the equivalent of watching programs like CSI, The X-Files or the current Battlestar Galactica. In short, much of the situations and the dialogue may not be suitable for younger viewers. If this is a concern, be advised. Also, the action is some of these programs can be very intense, and some of the scenes can be quite graphic. Again, this owes to the diverse audience for many of these programs, many of which are really not at all geared towards kids. I'd encopurage all parents to read the reviews and commentary about each of the series before making any purchases, and I would *always* encourage parents to screen any Anime before letting kids see them, especially those aimed at an "over 14" demographic.

Also, one final tip... I have found that I enjoy the stories best when they are played back with the original Japanese dialog and English subtitles. While I give credit to the cast of actors that dubs these programs into English, and some of them do a superb job at it, there is something about the original Japanese dialog that gives poignancy to the scenes that the English dialog often does not. Also, sadly, it seems that the English dialog tends to be more "edgy" and use harsher words than the equivalent Japanese translation, hence there are titles where I tell my kids "sure, we can watch that one, but we'll watch it with the Japanese voice track and subtitles".
Posted by Michael Larsen at 5:00 AM