When Gaming Gets Out of Hand (LOL!) 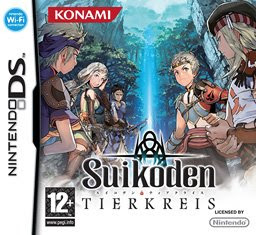 So I’ve finished a grand quest, and it’s one that, upon reflection, probably took me way too much time or exposed way too many of my tendencies. What could this be? Was it some grand Scouting project? No, but I did complete two weekends of Wood Badge training which were a blast an I did host my son’s Eagle Scout Court of Honor. Was it some amazing home project? Well, I did do some weeding and restructuring of our backyard, and I did replant an apricot tree that I think is finally ready to survive in the big boxes in the back and thrive (knock on wood). No, the activity I’m referring to is one that, on the average, took two hours out of every day for 70 days. I completed “Suikoden: Tierkreis”.

Now, before people look at me and wonder “dude, you did what?!”, it helps to understand a little bit about how I am wired and what engages me. Many people love to joke that I’m the epitome of “short attention span theatre” but that’s not entirely true. In fact, I can point to many times in my life when I have been “bitten” by something and that bite has driven me to make huge investments of time and interest in something. I know this about myself, and my family knows this about me, too. When I become fascinated with something, it tends to become all encompassing and all-consuming. I’m not content to be a dilettante; I want to do everything, learn everything and know everything about a topic. When it comes to camping, I want to explore every scenario and try out every experience. When I discover a series of hikes, I want to do every one of them. When I was asked to advise the Order of the Arrow Dance Team, I went headlong into learning how to make the clothes and create the outfit, learn the songs, and help the kids present the material. I wish I could better control this particular aspect of my brain, as it would be incredibly helpful if I could actually apply it to other areas of my life, but alas, it’s highly selective… I don’t know I’ve been “bit” until it happens.

“Suikoden: Tierkreis” is the first game I have played in awhile that has had that effect, and I think I realize why. There’s something about the RPG experience that just gets me, especially when there’s an interesting story that surrounds a lot of characters. And in the Suikoden universe, you are guaranteed to meet a lot of interesting characters. For those who have never heard of Suikoden, it’s the RPG franchise of the company I used to work for, Konami. Many different game companies have long running RPG franchises, Square Enix has Final Fantasy (another of my favorites). Atlus has Shin Megami Tensei (again, another of my favorites). You can add many other companies and games to this list as well, and Konami’s flagship RPG series is Suikoden. Suikoden is a series of games that in format in structure are all similar to the Chinese classic Shui Hu Zhuan (水滸傳), a story that was written in China in the 13th or 14th century. The core of all of the stories is the banding together of “108 Stars of Destiny”. In other words, while much of the gameplay revolves around standard RPG fare of quests, battles, story development and area discovery, the biggest aspect of the game, and for someone like me, the most entertaining, is the actual recruiting of all 108 Stars of Destiny (in this version of the game, they are called “Starbearers”). The same idea though is in each game, that the 108 characters band together for the cause of a righteous goal or purpose.

The first time I played the game, I made it through to the final level, and realized that I only recruited 78 total members. I restarted the game after 70 hours of play and this time, I went with a GameFAQs guide to make sure that I was able to find all of them. I was very happy to have done this the second time, because while many of the characters are obvious, there’s a lot of them that are not, and can be missed if you don’t have the right combination of people in your party or other story elements in place. While it’s possible to complete a Suikoden game satisfactorily without recruiting all of the characters, for me, that’s kind of the whole point (LOL!). On Sunday, I completed the second play through with 100% completion, and all 108 Stars of Destiny recruited. Total game time the second go round, 70 hours, which meant I’d put in 140 hours of total play time in two months, or on average, two hours each day.

On one hand, I feel happy that I beat and completed the game. I definitely feel like I got my money’s worth out of the title (at $35 retail value, 140 hours of game play translates to $0.25 per hour… pretty cheap entertainment, if you ask me). Most of my play time was done on the train to and from work during this time, so it really averaged about an hour outside of my commute times. Still that’s a fairly large chunk of time, no matter how one looks at it. What could be done in 140 hours? By comparison that’s the equivalent of 3 ½ weeks work time using 8 hour days as the comparison. Did I figure I would spend this much time? Yes, but I figured it would be spread out over 3 or 4 months. Instead, my brain clicked in a way with it that made me want to complete it much faster (well, faster is a relative term, in my case it meant I was willing to spend more time with it). Thus some early mornings, late nights, and commute times all went into this “quest” of mine. What could I have done otherwise? It’s pretty obvious that I could have easily written 140 blog posts in that time (don’t get me wrong, I’m not sure anyone would want to be subjected to 140 blog posts by me in 10 weeks, but I’m just putting that out there ;) ). I could have been much farther along in my study of Japanese. There’s many other projects that I worked through that could have had more attention and more focus has I not spent so much time on this.

Understand, I’m not complaining, but I am highlighting a factor about me and how my head works. I understand it (somewhat) and I am not saying I felt like I wasted my time playing this game. It was fun, it was engrossing, and in many ways it gave my brain some great exercise in problem solving and vicarious adventure. Still, at the end of the day, it’s a game, nothing more and nothing less. While I’ve enjoyed playing it, and perhaps it may give me some additional insights into solving future puzzles in future games, it’s not going to ultimately give me a leg up on life… well, even there, that’s not entirely true, because if playing the game put me in a better and more focused mood after completion, then perhaps, yes, it did serve its purpose, even if that purpose is to remind myself that “playtime is over” and there’s a bunch of stuff I need to do… that is, until the next game comes along ;).
Posted by Michael Larsen at 6:00 AM

Well, at least it kept you out of trouble for awhile! :)