Scoutmaster Mike: The Kente and the Generations 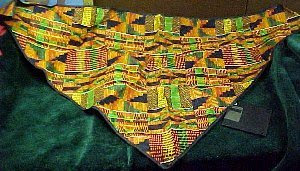 A few days ago I off-handedly spoke about a tradition that we have in Troop 250, wearing the Kente Neckerchief. Where did this tradition come from, and why does Troop 250 use it?

As far as the tradition, it was my development that I brought to Troop 250 when I became its Troop Committee Chairman back in 2001. At the time, there were few long standing Troop traditions, and I wanted to see if I could help make something that would both energize the boys and create a sense of tradition and continuity within the Troop, a way for the boys to more directly remember those who had gone before.

Back when I lived in San Francisco, and was Scoutmaster for another Troop (Troop 92), I was asked to lead the Explorer Post that met in Pacifica that consisted of all the Youth members over 14 from all of the Wards in our Stake. Since I didn’t want to duplicate what they were already doing, I went to the scout store to see if they had something unique. When I was there, I saw that they had a neat multi-patterned African style kerchief. When I asked what it was, they said it was called a “Kente”. I asked if it had any special significance, or if it was just a unique looking kerchief? Other than the fact that it was popular with many of the Troops that had a strong African-American membership, they said no, it was freely available for anyone to purchase and to wear, but that it was originally designed to not be a “troop kerchief” per se, but should be something special or reserved for special individuals, as befits the original Kente cloth that is made in Ghana.

When I got to the Crystal Springs 1st Ward, I thought I’d get the chance to work with Scouts immediately, but instead I was asked to serve as a Stake Missionary for two years. When I came back into active service with Scouts, I asked Tim (our then Scoutmaster and current Bishop) if we could do something unique. I remembered the Kente cloth and over the ensuing years, I kept coming back to it and wanted to see us do something with it. When I learned Kente cloth was given to and worn by men of status and bravery, I thought “A-ha! I know how we could use it!” I wanted to find a way to encourage boys to earn their Eagle award, and likewise find a way to encourage other boys to do the same, and also remember past Eagle Scouts, more so than how a plaque or desk statue would do. I wanted something they could internalize, something they could make their own, carry with them anywhere, and then give to others later on.

With this, the idea of the “Kente” and the “Generations” came into being. It started with one boy, the first boy that I approved and signed off on to sit for an Eagle Board of Review. As this boy had actually already been away at college for a year, he was put on deferment until he came back. Since I was able to help get him a Board of Review date, and he had his uniform but no kerchief, I gave him the Kente Kerchief that I had held onto for all these years, and suggested he start this tradition of the Kente and wear it to his board of review. As he was easily accepted as an Eagle Scout, we were able to hold his Court of Honor shortly thereafter. Since there is a common tradition in the Eagle Court to offer “Scouting’s Flame” to another member of the Troop and have them join them in the "Eagle’s Nest", a way of promising help and guidance to that boy so that he can himself become an Eagle, I felt that giving the Kente to this boy would be a great way of developing this tradition. Thus, the boy who first had the Kente signed his name on it, then gave it to another boy, and he would wear it until he in turn became an Eagle, at which time he would sign his name on the Kente and give it to another, and so on, and so on, and so on. We also decided a consequence if a boy received the Kente and did not earn his Eagle. The Troop would allow that Kente to “stop its Generations”, meaning that it will not be passed on to another. The boys decided that the right to pass on a Kente would be reserved for those who finish the work.

In the nearly thirteen years that this tradition has been in place, only one youth has received the Kente and not completed the Trail to Eagle. Every other youth who has received it has become and Eagle Scout or is still active in the process of becoming an Eagle Scout. Names are not listed to protect privacy, but I have used initials to denote who has received the Kente and the Generations represented (edited: this list is current as of October 13th 2014):

SP (I)/BN (I)/AG (I) --> MK (II) (Life, did not get his Eagle) --> [X] (This is the one time that multiple boys chose to give their Kente to one person, and that one person decided to not get their Eagle. Thus three Generation lines ended here… this was also when I suggested, and the Troop decided, that only "one to one" transitions would happen; no more groups.)

RS(I) (Eagle board of review to happen in December)

In the course of a little under 14 years, 31 boys have worn (or are wearing currently) the Kente, and of those 31, 22 have completed the journey, 8 are in process and 1 never finished. It will be interesting to see how many more boys will be “marked” by the Kente in the coming years, and I truly dream of a day when every boy in the Troop will have one or will have worn one at one time or another. It’s also my hope that this will be a tradition that will be practiced for decades in this Troop, until the kerchiefs can no longer hold any more names. While I know it’s not practical to think every boy will make Eagle (statistically only 4% of all scouts ever reach that rank), I am heartened by the success that the "Generations of Kente" has to show. I’m hoping to see us record many more years and many more Generations of honor to these young men.
Posted by Michael Larsen at 6:00 AM