Some Shots of Eagles 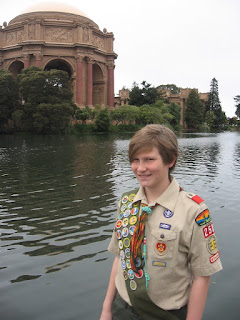 With May 30th coming up *really* fast, Chris and I are in the process of trying to get invitations out to people and to make sure that we have everything arranged. To that end, we tried this weekend to get some neat pictures of the boys for their program and invitations. You'd think that going out to get good pictures near and around San Francisco wouldn't be a big deal... you'd be wrong in this case (LOL!).

It's May, and for some reason Mother Nature picked *this weekend* to give the Peninsula a healthy dose of fog and drizzle. Ocean Beach? Covered in fog, no visibility. Seal Rock and Sutro Baths? Not visible through the haze. Golden Gate Bridge? Fuhgeddabout it! As I was thinking what might look cool on the Eastern side of the City, as we descended into the Marina District and the drive to the East Side, the skies parted for a bit and showed the Palace of Fine Arts clear as a bell... and with that, we decided we'd found our backdrop. The procession of Wedding photographers and brides and grooms that were there at the same time confirmed for us that, yep, this would be a good place. we had to be patient and work around the wedding parties, but I think it worked out pretty well. 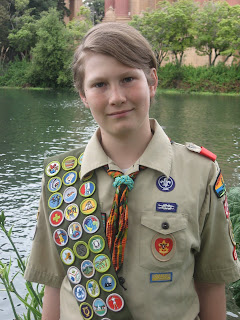 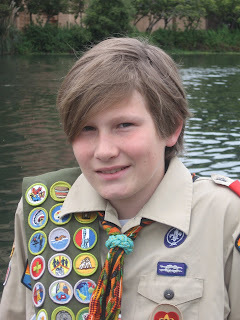 These are a couple of close-ups of Nick. The shift in hair part was necessitated by the wind, in case anyone is curious :). 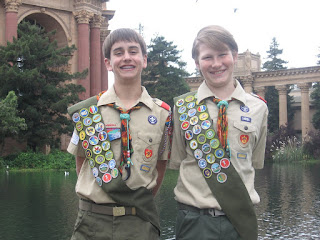 I like this shot of the two of them together. There's an inside joke they were constantly going on about and it made getting pictures tricky after awhile because they kept cracking up laughing. Still, even though this is right on the edge of a giggle fit, I think it captures their personalities perfectly. 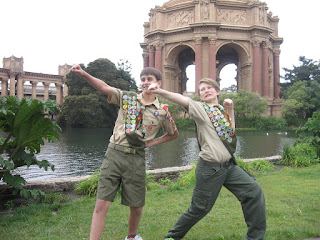 These two are so young, I decided we *had* to get a shot of them just being silly. This will very likely be in the back of the program :).

Moral of the day is "don't give up on an idea, even when it looks like everything is working against you. Your golden opportunity may be just around the corner". Glad we didn't just give up when all the other areas we thought of didn't pan out as expected.
Posted by Michael Larsen at 6:00 AM

Awww, you beat me to this blog! I love it!