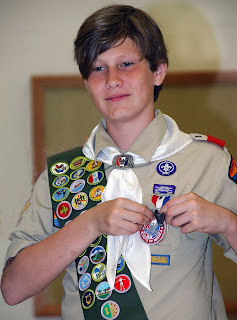 I know this was ten days ago, but I wanted to record for posterity the fact that, On May 30, 2009, Nicholas Larsen received his Eagle scout award, officially (he was designated an Eagle Scout on April 29, 2009 by virtue of completing his Eagle Scout Board of Review).

This was an awesome day, and one I have been wating a long time for. I know that may sound silly, since he's only 12, but really, I've been waiting to pin an Eagle Scout pin on Nick since the day on August 14, 1996, when I heard the words "it's a boy"! Before you think this to be excessive, please remember that on that day, I was the Scoutmaster for Boy Scout Troop 92 in San Francisco, so this line of thinking really isn't all that excessive (LOL!). Add to that the fact that I have been, in one way, shape or form, Nick's Boy Scout leader since the day that he officially became a Tiger Cub on June 1, 2002. So Nick has been a little "fast tracked" in this pursuit, partially by circumstance, and partially by design. 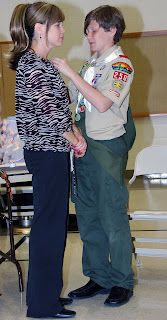 For some, the idea of becoming an Eagle Scout is a daunting experience. For Nick, it's been a daily expectation. He's been a scout now for about 60% of his life :). that's not to take away from the fact that this is still a big achievement for any young man, whether he earns it at 12, 14, 16 or just shy of 18. 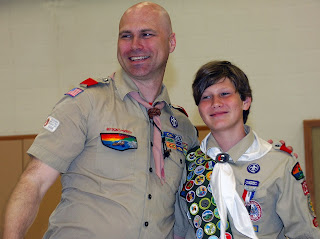 I am happy that Nick decided to take on the challenge when he was young, and I am also happy that he has decided to continue with Scouting and wants to go into Venturing and earn the Bronze, Gold, Ranger and Silver awards. I'm hoping to be there every step of the way with him.
Posted by Michael Larsen at 6:00 AM