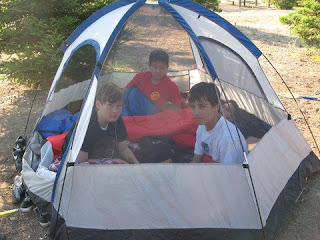 On Friday afternoon, seven boys and four adults gathered together for an interesting experiment. Though we as Scout leaders often talk about being just advisors and that it’s the boys that lead the program, in reality a lot of the program is led and directed by adults. Likewise, while boys want to believe that they are ultimately in charge, there are a lot of things that Scout Leaders do in the background that they are often not aware of. What happens when the adult leaders make good on a pledge to completely butt out of the leadership decisions and leave the whole experience, entirely, up to the boys?

The answer is... what happened this weekend (LOL!).

So here’s a recap… we arrived at Huddart Park right around 6:00 PM. The adults set up their camp area in the first camp site, the boys set up their camp just down the hill in the next camp area. Close enough so that we could observe and take notes, and intervene if safety required it, but far enough away that we wouldn’t be able to hear general conversations or interfere with any of their plans. While the adults had their camping area up and together in about 20 minutes, the boys… well let’s just say it took them quite a bit longer. We brought five tents for the boys to use… but they opted to go with two. One large one, one small 2-3 man one. The adults got together and quickly put together their dinner; Paul had premade the enchilada pie recipe that we had, so we just started the coals and waited for them to get ready. While we waited, we also put together a recipe called “Monkey Bread” which we had never tried before. By the time the coals were ready, we had both dishes on and cooking. Looking down at the younger guys camp sites… two guys were actively engaged in trying to cook, with little to no help from anyone else. After the adults had finished dinner, we all quickly got together and cleaned up our plates and washed out or pots… the boys were still trying to cook as the sun was going down.

While I said that we would not interfere, I did pop down a couple of times just to see how everything was going. Nick had planned on a dish called Coca-Cola Chicken, and it turned out terrific, but it took a long time to cook with what they had. As I promised not to interfere with their plans or their preparations, I withheld comments, but I could clearly see that they needed to have a better understanding of how to effectively cook with charcoal, something that only comes with experience. By the time they were ready to cook their cobbler, the coals had died down and they were having a difficult time getting enough heat to cook it. I suggested that they scoop out the cobbler and put it in a container and try again the next day, a decision my son decided was a good one :).

As the adults decided to turn in, we noticed that there was a fair amount of noise in the lower camping area. True to our word, we decided to let them keep their own time… if the SPL didn’t quiet them down, then they would be allowed to do whatever they chose to do… as long as it didn’t wake us up. Around 3:00 AM, when there was still some nattering going on, it was enough to wake up Chris, who then yelled out a “Boys, go to sleep!”… and all was quiet in Huddart Park after that (LOL!).

Morning came, and the adults awoke with the rising sun around 7:00 AM. We proceeded to get right to breakfast (a great concoction I discovered called Dutch Oven Train Wreck… looks awful, tastes fabulous (LOL!). Looking down, I could see that the boys were grousing as to what they should eat, and realizing that they did not grease the griddle they were cooking their eggs on… net results, some chunky eggs for some, and some boys that opted just not to eat. A review of the camp area was quite telling; there were pieces of equipment strewn everywhere, and it turns out that, since the boys only set up two tents, it was somewhat amusing to see that one small tent was housing five boys, while a big tent had two boys in it (not sure who decided that, but hey, there it is).

After we finished cleaning up everything and packed our stuff into the car, we announced that we would be leading the boys on a five mile hike from the entrance area to the Toyon campgrounds. Some boys were equipped with hiking books, their scout shorts and an activity T-shirt. Other boys opted to wear what they felt was “cool” and “fashionable” (read: tight skinny legged jeans and converse sneakers). I will admit I carried probably the hint of a wry smile as we all made our way to the Toyon campgrounds and back… there were some grumblings from some boys that their jeans were uncomfortable, and that their feet were starting to hurt (hey, ‘Be Prepared” is more than just a motto, it’s a way of life for scouts). By the time we came back to prepare for lunch, again, the boys had their fixings and we adults had ours. The boys found out, sadly, what happens when food is not put away properly. They had two loaves of bread to start, but one of them disappeared during the night (likely cause being a raccoon that decided white bread would be a nice night-time treat).

As we drove the boys home and we saw them alternate between smiles and grumblings, we think some valuable lessons were learned this weekend. First, many of the miscommunications could have been handled if the boys had put together a duty roster and explained who was responsible for what (something the adults did each campout, but which they decided they didn’t need… until it was too late (LOL! ). Also, they noticed that the adults took some time and prepared many of the food items in advance, which saved time. They also saw that teamwork was what got the adults to get everything done efficiently and cleanly, and that we were rarely at a loss for time or in need to scramble for anything. The boys also realized that the scout uniform is designed to do things in, more so than their everyday wear (Nick was walking a little “wide legged” yesterday.. , that ought to be all you need to know to explain his state of being). It sounds like I’m poking fun, and I‘m really not… but I will admit to smiling a little bit at these revelations the boys are having now. For the last two years, I have been trying to get them to follow this model, and encouraging them to do what they need to do to make it happen. This has been seen as meddling, and adults taking on too much of a leadership role with the Troop. After this weekend, I hope the boys now have a much clearer picture as to what truly leading a campout entails and I will be very interested in seeing how the next campout goes. Whether or not the next one is truly a “silent” campout again is anyone’s guess, but I really do look forward to the day when we have one of these silent campouts and all of the objectives get met at a high level. Then I’ll know I’m really doing my job right :).
Posted by Michael Larsen at 6:00 AM