For the Love of (Dan) Carlin 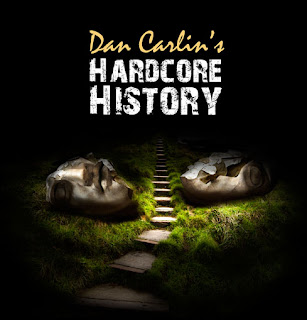 OK, I confess, I’m a History Geek. I love history, I love reading about history, I have many different eras and areas that fascinate me. I’m a longtime geek of Ancient History as it relates to Egypt, Greece, Anatolia, Meso-America, India and Celtic Britain (in no particular order), and thus I’m a fan of books, publications and media that talk about those things. I can now add to that a podcast that, not only do I enjoy, but I’ve even committed to buying and owning the episodes, because I love listening to them again and again and again. That podcast is “Hardcore History” and it is produced and narrated by Dan Carlin.

For those of you who have followed my blog or other comments in other areas, you may already know that I’m a fan of Dan Carlin’s, especially when it comes to his political commentary (his other podcast called “Common Sense” is best described as “an independent’s non-partisan view by way of Mars”). Over the past several years, I’ve grown seriously weary of partisan bickering between Dems and GOP, so I enjoy Dan Carlin’s commentary because he doesn’t pretend to be on any one side. He calls a spade a spade and does so without any party affiliation. If he thinks Republicans are doing something praiseworthy, he says so. If he thinks Democrats are being idiots, he says so, and vice versa. His point is that he’s a fan of the political process and of the Constitution, and that is what drives his shows and his commentary. I don’t always agree with him, but he brings interesting stuff to the table.

It’s this same intensity and drive as a “fan of history” that makes his Hardcore History podcast so interesting and appealing to me. Dan makes no bones about the fact that he is not a historian, he is a fan of history. Because of that, he can go into places a historian likely wouldn’t go. He is willing and able to dissect history’s wild bits in a way that brings it to life, and in a way that is both deeply engaging and very entertaining (his delivery has been described as “William Shatner on crack” (LOL!) ). But the real power of his program is that he takes topics that could conceivably be dull and lifeless and fills them with so much life that you can’t wait for the next episode. Example: he did a three part series on the Punic Wars, each program averaging an hour in length. To some, I’m sure the thought of hearing a three hour monologue on the causes, effects, and aftermath of the Punic Wars would be a snooze-fest. Not in Dan Carlin’s hands! He made it so that I wanted to hear each episode without interruptions, and then I could not wait for the next one to be available. As of this writing, his latest topic is “Ghosts on the Ostfront, Part 1” and it deals with the ramifications and developments surrounding “Operation Barbarossa”, Hitler’s army attacking Russia during the Second World War, and all of the details that surround it. Check it out, it makes for fascinating listening.

Dan’s not content to just ramble; he also posts his references and encourages others to read and learn from them as well. I find this to be incredibly valuable, as it allows me to also see things that I may not have ever seen before, and learn from sources I hadn’t considered.

So for those who have a similar “geek streak” like mine, give some time to check out Dan Carlin’s “Hardcore History” and if you like it, give him some love by dropping $1.00 for each episode you listen to and enjoy… as his outro line says “A buck a show… it’s all we ask!” :).
Posted by Michael Larsen at 6:00 AM