A Halloween To Remember :) 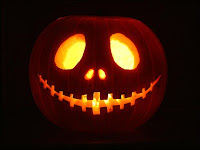 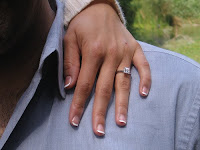 Halloween is a special day in my life, more so than perhaps only a handful of other holidays and special anniversaries. You see, Halloween is the day that I proposed to Christina back in 1991. Now this should come as absolutely no surprise to anyone who knows me (of course Michael and Christina got engaged on Halloween!), but what’s not so readily known is the circumstances that led up to that momentous declaration and decision, and the somewhat serendipitous way that it happened. Over the years I’ve been both lauded and excoriated for the way I did this (LOL!), and the story has taken on a life of its own over the years as well, so I wanted this HAlloween to set the record straight, once and for all, as to what happened, how it came about, and what ultimately resulted (well, one of the results you already know about… Christina was crazy enough to marry me, for which I will be eternally grateful :) ).

So let’s set the way back machine for Halloween Day, 1991.. It was going to be a day unlike any other, but earlier in the day, I figured it was going to be unique because, for the first time in many years, I was not scheduled to play a show, promote for a show, or somehow be involved with another friend’s band in putting on a show. For once, I decided I wanted to clear the calendar that Halloween, celebrate Christina’s recent arrival in her apartment in San Mateo, and be the happy little domestic couple giving out candy to little kids who would Trick or Treat. After a couple of hours, we realized that nobody was coming to the door. As we walked out and saw some people gathered on the common porch, we asked where the Trick or Treaters were. The people laughed and said “nobody trick or treats the houses and apartments around here… everyone goes to Hillsdale Mall and does their Trick or Treating there!” Hmmm… I must admit I’d never considered that, and it did sound a little odd to me, but hey, when in Rome… so we decided to grab our coats and head down to Hillsdale so we could see what the kids were doing. Besides, I was willing to bet that the mall was probably done up quite well for the occasion.

As we arrived at Hillsdale Mall, we watched the little (and not so little) Trick or Treater’s run about from store to store and gather up candy, treats and other items (not to mention a rather brisk business at several of the novelty stores for last minute costumes). It was here where I chuckled and said “huh, I wonder if I’ll ever bring my kids to a mall to Trick or Treat”. Christina and I joked about that idea, and somehow that little side comment about trick or treaters morphed into a conversation about having kids and about marriage in general. Now, I wasn’t at that moment all that keen on bringing up the topic of marriage, because at the time I was quite broke, making very little money, and carrying a load of debt. I didn’t particularly see myself as stable husband material at that particular moment. As Christina asked me at what point I could see getting married, I said a very honest “oh, three to four years, realistically.” After I said that, I looked at Christina, and she had an expression that would not be out of place had I directly slapped her. She stammered “f-f-four *years*?!” I tried to explain why, and how it just seemed so unrealistic at this stage, when something deep down told me:

“Michael, shut up. Now! Christina has just told you something major here… she doesn’t care about your financial situation, she doesn’t care about how suited you feel you are to be a husband… she just telegraphed to you in huge block letters that she wants to marry you! YOU! And she doesn’t want to wait four years for that experience. Be a man and step up!”

With this realization, I had to find a way to really make sure I was reading the situation right, so I immediately changed tactics and said “Hey, I have an idea… let’s go and, for the fun of it, see what kind of a ring you might like. I mean, we are here, and the mall is open late tonight… c’mon, it’ll be fun.” With that, we decided to go and take a look at the dozen or so jewelry stores that were in Hillsdale Mall at that time. We looked at lots of different styles, and many of them were, while nice, just nothing that screamed out to either of us “oh yeah, that one”… until we came to a Zales Jewelers on the bottom level. Over in the corner was a small display and in it was a neat looking ring with a bunch of very small diamonds surrounding a center stone, all on an asymmetrically angled ring. This was the one that Christina couldn’t take her eyes off of. I liked it, too because it was unique; truly different than anything else we had seen. Her eyes lit up and her smile was all I had to see.

I asked the lady behind the counter if we could have a closer look at the offset ring with the slightly angled band. She brought it out and Christina tried it on. As I saw her smile widen, we had the following exchange:

As the lady behind the counter thanked me for agreeing to purchase the ring, we had to make a decision on payment. I told her I’d make a 20% down payment, and finance the rest (for my long time readers, this was before my financial epiphany, so yes, you’re going to cringe at my saying this, but yes, I did finance the ring… it was a spur of the moment decision, after all). I decided to go with the classic De Beers philosophy of two months of salary for an engagement/wedding ring, and fortunately, this particular ring fit in that philosophy and price range :).

As she handed me a loan application, and as I was filling it out, Christina’s expression went from smiling, to looking at me quizzically, to showing genuine concern, to complete and total alarm. She realized what I was doing, and that I was actually following through with purchasing the ring she was looking at. She would nudge me and say “um, what are you doing?” I of course, decided I was not going to answer. She looked at me again and said “are you doing what I think you’re doing?!” Again, no answer. At this point, I started whistling (yes, I know, but I really was having fun at this particular point in time, and the anxiety of the situation was actually quite entertaining :) ).

When the lady came back and said “OK, all is in order and your loan has been approved”, I thanked her, removed the ring from Christina’s finger, put it in the box that they gave me, and I stuck the ring in my pocket. I suggested that we should probably leave. Christina just nodded and followed me, looking a little like a deer caught in the headlights. As we were walking into the main courtyard of the mall, I suggested that we should go to our favorite little sushi haunt near her apartment (Isobune on Burlingame Avenue).

We drove over to the sushi place with a little Peter Murphy playing in the background (symbolic, yes, as the album “Deep” was one of the first things we listened to on our first date roughly a year earlier) and we walked in and asked for one of the booth tables. As we sat down and ordered, I looked up and there was Christina, looking at me with an expression that told me she really couldn’t take it anymore. As I talked about what an interesting night it had been, such fun at the mall, such cute costumes, and now here we were at one of our favorite places, it just seemed like the night was going so wonderfully. Still, for some odd reason, I felt like I was forgetting something… what could it be?

At which point, the “Kelly trademark smirk” made its appearance, and I said “oh yes, now I remember…”. I reached into my jacket pocket, pulled out the ring, opened the box up, got down on one knee in the aisle and said the following:

“Christina, you have put up with a lot regarding me. Some might say I’ve put up with a lot regarding you, too. Tonight I realized that we both want to do this, and we don’t want to wait until everything is perfect. We want to go fir it right here and right now. In front of all of these people, and all of this dead fish, I hereby ask that you marry me. I can’t guarantee that we will be rich, I can’t guarantee that we will always be comfortable, but I hereby promise that life will never be boring. I love you and, please say yes!”

She did, I slipped the ring on her finger, we kissed… and the whole restaurant clapped.

And with that, Christina and Michael were “semi-officially” engaged. We were officially engaged two days later when I made the formal request of her father (old country Germans and Austrians tend to take this seriously, and so did I. I was relieved to hear him say in his thick Austrian accent “thank you very much for asking, I’ll gladly have you take her off of my hands” followed by a hearty laugh :) ). With that, we figured it would just be a quick announcement and a few plans made to get the rest taken care of. However, looking back, we made an interesting decision… since she was born December 3rd, 1968, and I was born December 7th, 1967, we thought it would be cute to have our wedding be between those two dates. Little did we realize that trying to get married in December would be one of the most challenging things to pull of, and with so little time, it would be virtually impossible to book a church or reception area. We decided, though, that we wanted to have that little tradition, so we both said “OK, let’s shoot for December 5th, 1992. That will give us a whole year to prepare, no pressure, and lots of time to get everything in place.”

What would follow would be one of the most defining, and I’ll dare say, necessary years of both our lives, and just how fateful the decision to wait a year to actually get married would be… but that story, my friends, will have to wait for another day :).
Posted by Michael Larsen at 6:00 AM

Michael, I need to put your blog on my sidebar, I haven't looked at it forever and this story was so fun to read, I can't wait for part 2!! What a pretty ring and a fun story! Sarah

Two things in particular stood out for me.

1. Peter Murphy. You've just increased your coolness factor by about a thousand times right there. :D