Halloween 2008 has officially come and gone. Some highlights of this year's festivities: 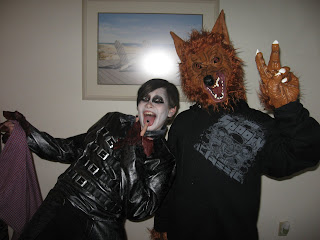 Nick and his pal, Jessie, and their campy approach to the whole Twilight Edward/Jacob thing... and no, I have no control whatsoever anymore when it comes to my son's costumes (LOL!). 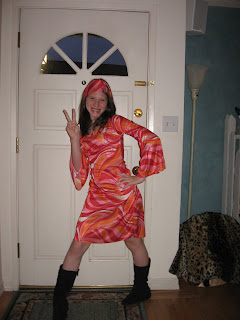 Karina putting the sass on! 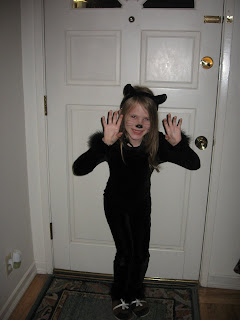 Amber as a kitty cat... *the* perfect costume for this little one. She stayed in character just about the entire night ;). 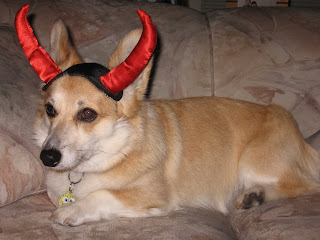 And of course, what would Halloween be without the obligatory tormenting of the family pet. Rikku was a good sport through all of this, to be honest.

We brought the kids around the Crestmoor neighborhood for the better part of two hours (and it was a mob scene this year; seriously, between Charleston and Kingston, I thought it was a street party. I've *never* seen it this crowded in our neighborhood!) Nick and Jessie decided to go their own way, and since they are old enough now to make that decision, we complied (they ended up hanging out at Jessie's house after Trick or Treating until well after I was in bed). The girls and I went around the neighborhood from 7:00 PM until just before 9:00 PM, at which point, Amber was complaining her bag was too heavy to carry anymore (sure sign that it's time to call it a night). We have a standing rule in the house; exch kid gets to pick 25 pieces of their choice, the rest goes into a big bag that Dad takes back to work. My kids are slowly realizing that this is not my way of punishing them (they can keep the best of the best, and I don't stop them from doing that). My co-workers, though, *dread* seeing me come in the day or Monday after Halloween, because they know this *huge* bowl of candy will be on the break room table. Funny, but it never seems to be there for very long (LOL!).

Oh, and for those keeping track, I took second place in my company's costume competitoopn. that now has me at 2 1st place wins and 2 second place wins. I'm only allowed three wins, at which point I join the "Gallery of the Greats" and I am no longer eligible to compete. So I have another chance to grab the coveted third win... and yes, I've already started planning my costume for next year :).

Well, here's wishing everyone a happy All Saints Day, and wishing all a happy sugar hangover recovery as well.
Posted by Michael Larsen at 6:20 AM