Bopping Along to The Three O’ Clock!!! 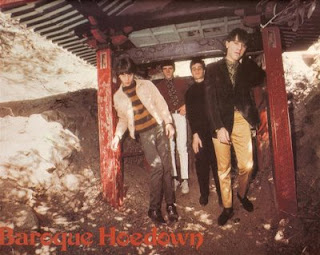 It’s fun to be reminded of things in the past that just bring back strangely fun and wonderful memories. For me, much of my life can be compartmentalized in the music I enjoyed and the times it reflects. Unlike many casual listeners, I was an absolutely schizophrenic listener. I had no problem telling people I could listen to rock, new wave, punk, metal, disco, R&B, soul, funk, jazz, blues and country... in some case all on the same tape (yes, kids, I’m that old (LOL!) ).

Today, as I was digging through some old archives of music, I came across an album I hadn’t heard in years…. The Three O’ Clock’s “Sixteen Tambourines”. Oh, how I loved this group and the sound they and other similar groups spawned, the pseudo-mid-sixties vibe that was so prevalent to the Beatles and the Monkees and revived in the early and mid-80s. The Three O’ Clock were considered by many to be the centerpiece of the “Paisley Underground”, a style of music I was decidedly a fan of, and whose influence followed into my own musical career (many people may not have realized it, but my high tenor voice of the time owed as much to my listening along to and singing along to Michael Quercio as it did to any other influence… the long sleeved, buttoned up and untucked psychedelic shirts and collar broach I wore were also a conceit freely lifted from the Paisley Underground, albeit in a decidedly more glammed out fashion ;) ).

For ages, I have wanted to find their album “Arrive without Traveling” on CD, but alas it was never released as such. Well, imagine my surprise today, as I was dinking around on the net while listening to Sixteen Tambourines… that Arrive without Traveling and Ever After (their 1986 follow up album) were re-released in 2003 as a “double CD”. With the holidays coming up, I’m giving anyone who wants to surprise me for my birthday (it’s December 7th) or Christmas (do I need to remind anyone of that date (LOL!)?) the opportunity to do so :). My Amazon Wish list is right here (sure, this is a little mercenary, but what the heck, I’ve given gifts to people who have made mention of interests in the past, maybe fortune will smile on me the same way… and if not, ah well (LOL!) ).

Otherwise, today is a day that will be dedicated to my rewriting smoke tests, and Michael Quercio’s ever so familiar helium-sucking voice will be keeping me company today. Life is good :).
Posted by Michael Larsen at 5:00 AM