Shedding of Innocent Stuff: The Most Sacred of my Sacred Cows

It would be impossible for me to talk about the Shedding of Innocent Stuff without attacking my first and foremost "Exhibit A" of Stuffitis.

What you see here are the remnants of Dreamtank, the name of my former production company and the pieces of what were my life as a musician, in one form or another over the years. Believe me when I say there is no greater monument to the excesses of my ego, my need for stuff, and to my former obsessive compulsive self as exists in the remnants of equipment here. What is also very telling about all of these items is the fact that a large part of what you see here are the components of my major debt that I incurred many years ago. I think part of me hangs on to a lot of this gear simply because it is so intertwined with such a key period of my life. 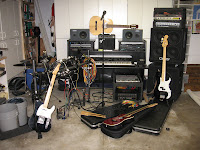 Here's a shot of everything as it currently exists. What you see is what is left of all of the musical equipment that I have owned over the years (and this isn't even half of what I used to have!). 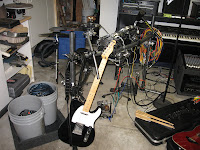 This strange stand-up item is my drum set, an electronic and MIDI amalgamation of pieces I've gathered over the years. The guitar hanging from the kit is my solid-body electric guitar, a 'black-tie" Fender Telecaster. The red instrument you can see just a little of to the right is my acoustic/electric hollowbody guitar, also from Fender, called a Telecoustic. The two buckets are full of various patch cables, MIDI cables, and connector cables of all stripes and kinds. There's probably about $1,000 worth of cables in those buckets. 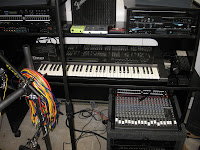 The Omnirax table houses mostly synthesizer gear, including a Roland JD-800 synth, an E-mu Proteus-1 w/ Orchestral Synth device, an old Peavy SP Sampler, a Peavy SX-II Sampler front end (yep, they're separate; no idea why, really, other than that was the way Peavey made them back then), a Peavy MIDI-Master II MIDI Patch Bay, a ProCo Patch bay for swapping cable connections, a Roland DEP-5 multi-effect unit, an Alesis D-4 Drum brain for the drum set, and in the box below the table... my workhorse Mackie CR-1604 Mixer. 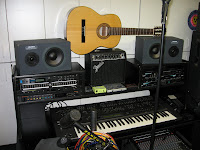 The oddly colored speakers are a pair of Alesis Monitor One reference monitors, with a small Fender Practice amp between them, as well as a Studiomaster MIDI diagnostic box, a MIDIman USB MIDI interface for any computer (eaiser to have all the equiment and swapout the computer rather than tailor the studio to the computer instead), a Roland USB Sound Module controller (for the same reason), and my cool little jam session controller, a Korg Pandora's Box. On top of all that is a nylon string classical guitar. 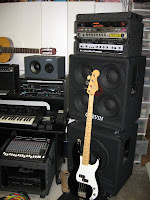 Here is the behemoth, a bass rig I could play any venue anywhere with. Yes, it's excessive, ridiculous and complete overkill, but man does it sound amazing! The rig is made up of a Carvin 1x15" cabinet, a Carvin 4x10" cabinet, a Gallien-Krueger bass head, an Alesis 3630 Compressor/Limitor, A SansAmp Rackmount module that can mimic just about any amp sound on earth, an ART MultiVerb effects unit, and a rack mount power manager, all in a nice rack-box. The bass is a Fender "Black-Tie" black and white Precision Bass. 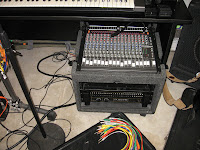 Another shot of the Mackie mixer and my oldest still running piece of equipment, a SUNN SPL 7000 power amp that has been in active service since 1986.

Now, to be honest, I know for a fact that I wil not be parting with *all* of this, but much of it is fair game. We shall see what the future brings.
Posted by Michael Larsen at 7:29 PM

Wow, that's awesome looking. Do your kids participate in your musical talents? I can just envision kiddos having a grand time in there playing Rock Band but without the PSP3.

For the stuff you want to part with, I would consider some of your former bandmates and/or your current friends who are in bands. Some of the equipment may be outdated, but a band with limited finances might not care as long as the stuff is in good condition. Just a thought....

I'm open to seeing if musicians are interested. There is certainly a benefit to selling it all lock, stock and barrel, but that's often a hard thing to accomplish, especially since I built the gear around specific needs and projects. But hey, I'm amenable to anything, really :).