Shedding of Innocent Stuff: Releasing Captive Books Back Out Into The Wild 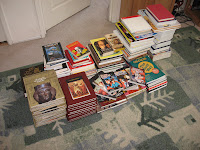 The stack for consideration to be downsized. 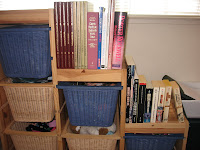 The ones that Powell's actually wants.

This is a hard post for me to write, it really is. My books are a reflection of my personality, and I think it's safe to say that for many people, there is a certain connection that they have to the various books that they have accumulated over the years. Jerry Seinfeld did a riff on this a decade or so ago where he poked fun at people holding onto books as though they were big game trophies. I laughed at the comparison for two reasons. First is because it's funny, but second... is because it's so painfully true.

We live in a modest sized house that is considered large for the area where we live (I thought it was quite small when I first viewed it, but then I grew up in Danville, CA where the average house is somewhere around 3000 sq. ft.). Having come off of living in San Francisco for several years, though, we were definitely stepping up in total house and land space. Still, with an active family of five, space comes at a premium. The choices are to expand the house to store stuff, or find a way to let the stuff back out into the wild. Those who follow this feature know I'm dedicated to the latter :). More to the point, I'm trying to practice an ethic of either library borrowing of books (hey, my tax dollars go to support a fantastic library in my town, so shouldn't I take advantage of it?!), or the notion of "if I like something enough to keep it, i need to like it enough to be willing to let something else go".

When I decided to tackle this particular demon, I figured the best way to handle it was to get every single book that we owned in the house out on the floor, This very act is a huge catalyst, because it forces you to take action. Every single book was up for consideration, nothing was sacred... OK, that's not entirely true. Each family member has their own scripture quad. Those are considered sacred and those will not be parted with. The several BYU Religion course manuals that I own will also not be parted with. The collections related to the teachings of the Presidents of the Church... I have all of them, and they will not be gotten rid of, and certain key commentary books that I love, such as James E. Talmage's Jesus the Christ, Le Grand Richards A Marvelous Work and a Wonder, Neal A. Maxwell's All these Things Shall Give Thee Experience shall always have a place in my home. I'm old enough now where I actually know people who have written books, and they have either given them to me with personal inscriptions, or I have a few older titles signed by the author. Those, of course, stay. Just about everything else, though, was fair game :). After I put everything out on the floor, I sorted on topic and grouping of titles. After sorting, I applied my "Pillars of Stuffitis" with some unique caveatrs this time:

1. Were the books that I had up to date and accurate?
2. Were they books that I actively read or considered likely I would actively read them in the next two years?
3. Were there more comprehensive and up to date details about the topic available online and from better sources than the books I owned?
4. Was there really and truly a likelihood that any of these titles would be something my children would be looking to read in the next two to three years?

With that, any books that passed at least two of the four tests above were returned to the shelves. What remained were titles I'd need to consider carefully:

Scouting publications: Generally speaking, I keep all up to date publications and purge any that are out of date. My lone exception is my Order of the Arrow handbook. That's the one that I got when I first joined O.A., and I refuse to update it or part with it. Also, general purpose externally published scouting books I will keep, no matter the age.

Native American Studies: Many of the books that I have are redundant, woefully out of date and/or are missing up to date information. Also, I'm doing away with books that reinforce old stereotypes. Plus, with so many great sites online dedicated to this purpose, I want to support their efforts. Still, I kept a number of books related to anthropology and essays about life among the various tribes from first hand account, as well as artwork books from artists such as George Caitlin, Karl Bodmer, photographic work by Edward Curtis, and contemporary artists such as James Bama and William Terpening. I also kept a couple of books that were collections of projects for Pow Wow craftwork. The rest I decided to let go of.

Music books: These are of two flavors, those with very "faddy" concepts and those with "timeless" content. I opted for the timeless ones in most cases, and purged the fads. Also, with sites like Guitar Alliance and other music specific sites that use media for their presentation, many of the printed books are becoming redundant. I'd much rather see a school music program make use of these than have them just collecting dust on my shelves.

Computer Books: This has been one of the bigger paradigm shifts for me. Due to sites like W3 Schools and others devoted to specific topics in computing, programming, systems and network administration, and having access to the O'Reilly Network for general content books online, the days of needing shelves of books to reference has become less necessary. As a matter of course, I still keep a certain number of books I consider essential, but they have shrunk *way* down from what I used to hang onto.

General Reference: A handful of good titles related to things like home repair, gardening, and various art and craft techniques, but a lot of repetition in what I had made it easy to shed a few of them. In addition, much of this content is much more up to date and relevant through online sites.

Children's Books: This isn't too hard for us, as we regularly purge books that will never be looked at again once the kids outgrow them. We hang onto some classics simply because they are all time favorites, but that's just a handful of titles.

The Classics: Here's where I'm going to be seen as a total "Philistine", but I'll say it... this was an area where we did a lot of pruning. I have come to the conclusion that, if I really want to read a Jane Austin novel or something from Alexandre Dumas, the library shelves are *overflowing* with these books. You practically trip over the number of copies of Herman Melville's Moby Dick that are on the shelves. Also, due to the fact that many schools assign these books for reading and make them available through school, it pretty much negates my being required to have them at home. I can just hear the people shouting "For shame, no Iliad or Oddysey or Aeneid?! No Cicero, Seneca, Plato or Socrates? No Shakespeare? No Milton? No Voltaire? No Hugo?" As of this past weekend, the answer is "no". Not because I don't find the books valuable, but because I decided that I will more than happily check the book out of the library if I get a major itch to get my Greek on (or fill in your language of choice).

College Textbooks: Really, no, I'm not likely going to be opening these again. Even if I do, there is typically better available writing on the subject available in many different resource locations. College textbooks are the real big game trophy hunting titles. Seeing as I was *not* a Math wiz as a kid, and seeing as I had to work my tail off for four straight semesters to bring my skill level up enough to complete Calculus, I absolutely kept that book on my shelf for all the world to see. "Why yes, I did make it through Calculus, why do you ask? Oh, I see, you are admiring my 800 page volume of Discrete Calculus of a Single Variable. Yes indeed, quite a ground breaking work... can I interest you in a vintage copy of Tindall's America, per chance?"... c'mon already (LOL!). News flash, by the time the kids are in their classes, they'll have their own textbooks to work through, and they'll be considerably more up to date than the dusty tomes I'm holding onto for swagger rights. Let it go and roam free. It's deserves it. What's more, it may still be relevant to another poor late teen or early adult that might find benefit from that particular title.

So some may ask, what was the final outcome of many of these tomes? A number of books went home with a good friend of mine to reinforce her home schooling curriculum for her kids. She was all over the collection of Lost Civilization books that I had; she saw them and just said "I'll take them all!", as well as some young reader titles that I had and the kids had fully outgrown. A number of books will be making their way to my favorite online used bookstore, Powell's in Portland, Oregon. What I love about Powells is that you can use their online interface, punch in the ISBN numbers, and within seconds, you will know which books they want and which ones they don't (yep, the don't pile is still pretty full, and the "wanted" list from Powells, while not massive, was certainly interesting). The small collection of books up top were the ones they wanted. The larger collection were books they didn't. Powells sends you a mailing slip where they pay the postage, and then they give you a store credit for titles that you want to get at a later date (I've already used their service a number of times in the past and found some terrific titles I might have passed on in other venues or purchasing them new).

Thus it's time for a plan B for a number of the books that were not claimed by my friend or by Powell's. Where they will ultimately go, that's hard to say. Once thing is for sure, these books will not be stuffed back into a closet, or thrown away (that's something I just can't do; it feels like I'm puting a beloved pet down). They wil find their way into the hands of readers who want to read them, at least if I have anything to say about it :).
Posted by Michael Larsen at 4:45 AM

between PDA versions of my favorites and using the library... I have gotten rid of almost all physical books... I love books but someday hubby and I plan to be living in a 5th wheel... ;-)