I used to have a bunch of aquariums up and running, but I scaled them back several years ago to just one big tank because I couldn't justify keeping them all up and running at the same time. However, now that my kids are old enough to take care of a few of them theirselves, and the fact that the big community tank is suffering under a heavier than normal bio-load lately, it made sense to ask if they'd be willing to have me set up the tanks with the proviso that they take care of them :).

So here are the setups as they appear today. 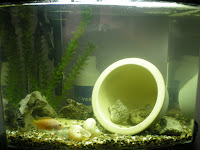 In the girls' room, since they have the least amount of space, I gave them a small 6 gallon tank and a pair of juvenile Archocentrus Nigrofasciatum (yes, I realize that that's being totally nerdy, but I only get a few occassions where I can be a total fish geek, so indulge me please (LOL!) ). These are a pair of Convict Cichlids; one's a black male, the other is an albino female. The girl's have named them "Bert and Ernie" (I explained that the orange tint was because the albino is a female, but they didn't care, so "Ernie" she is (LOL!) ). 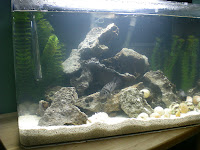 Nick had more space to work with, so we set up a larger 20 gallon tank. This used to be my African tank, and I was planning to just set it up with regular gravel, but when he saw the crushed coral and the tufa rock, he wanted to use it. He has two black Convicts and one female albino convict. The male black convict and the albino female don't have names, but the black female's name is "Ebony". She is my oldest living fish (close to ten years old). She is the "mother" of the Convict colony; most of the fish in the main tank today are her descendants; her original mate, an albino convict named "Clyde", died about three years ago from old age. 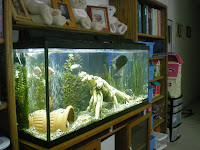 This is a shot of the now less crowded "colony tank". It's been awhile since there have been any spawnings in this tank, and I think the population density just got to be too heavy. Removing five fish should help a little bit. The big guy is named "Kite". He's a Heros Severus (Severum), and he just sort of drifts around the tank, kind of like a kite in the wind. The rest of the Convict Cichlids in the colony are unnamed (when you have more than a dozen, it gets hard to keep track).

Here's hoping that the fish like their new digs, and that the colony tank may see some new young now that the population has been thinned a litle bit.
Posted by Michael Larsen at 12:29 PM