It’s taken me a few days to process all of this, and to put into perspective what I want to say. August has been a n insane month for me, one in which I’ve had the experience of living the absolute of two different worlds and having them both come together.

Earlier this month, I had the chance to drop everything and be a dedicated full time scout leader for a solid week at Scout Camp (August 1-8). While fun, it definitely has its challenges (talk about exhausting, and that was with 5 additional adults there). Shortly after coming back home, we had boards of review to conduct (August 11), and Courts of Honor to hold, two of them. The first was an Eagle Scout Court of Honor for Jonathan Ott (August 15, who for those keeping track, gave his Kente to Sean Conley, which now means that, when Sean gets his Eagle Scout Award, he will be giving his Kente to a 5th Generation recipient (and I can probably guess who it will be :) )). Shortly thereafter, we followed on with the Troop Court of Honor (August 18), and a lot of awards being given out (actually, we think it may be a record number of awards, 76 merit badges and 8 rank advancements).

Once that was out of the way, the next step was to gear up and go absolutely ballistic with promotion of our reunion show (on August 22). The day of the show, we all went to San Rafael and rehearsed for four hours, as well as did a warm up show for the kids and family members that were not going to be at the night time show, and then we went down for sound check at Vinnie’s, headed back to the Concord Hilton to change, grab a light dinner, and then return for what was an absolutely amazing night of rock and roll, old friends, and reliving memories and making some brad new ones. It was phenomenal :). The next several days after that have been processing all of the pictures and video from the show and saying thank you to everyone that came, and cajoling those who didn’t as to what they missed (and believe me, those who missed it missed something genuinely amazing, and I’m not just saying that because it was my band, either :) ).

I’m writing all of this to give you an idea why you’ve heard so little of me this month. Suffice it to say, I’ve been a tab bit busy (LOL!).
Posted by Michael Larsen at 6:00 AM No comments:

Understand, I haven't been on a stage as a singer since 1993, and its been seventeen years since I played with this particular band. I cannot begin to say how amazing it has been to see so many friends from so many walks of life want to come out and see this show. I feel great about it, but at the same time, I fel a different kind of pressure to perform well than I ever have before. Does that sound weird? Anyway, in 37 hours, the doors will be open and the games will commence. As we used to say... "anything can happen at a High Wire show... and frequently does" (LOL!).

For the full details about this event, here ya go :):

TO PURCHASE TICKETS, go to http://www.chrismooredrummer.com/cmd/Upcoming_Shows.html

If you need a place to stay, go to http://www.marriott.com/hotels/travel/oakcp?groupCode=crycrya&app=resvlink&fromDate=8/21/09&toDate=8/23/09
Posted by Michael Larsen at 6:00 AM No comments: 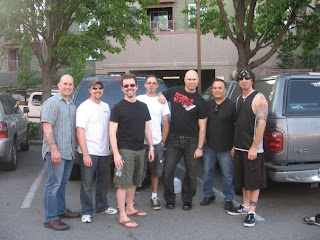 This has been a long time in the works, but we are finally coming down to the last few days. To say that this has been consuming my thoughts and actions these past few weeks would be an understatement (LOL!).

Here's a picture that I didn't get a chance to post here yet. You all are familiar with how we looked back in the day. Well, now you can see what we all look like now :)... and yes, that's *all* of us. We'll be performing with all members that ever made their way through the lineup. Expect pictures :).
Posted by Michael Larsen at 6:00 AM No comments:

HEy there, it's been a few days, but I'm still getting adjusted back to life after having been at Wente Scout Reservation for the 7 days. It was a great week for all of us. Some milestones:

* 17 boys from our Troop went, which I think is a record (well, at least since I've been a member of Crystal Springs 1st Ward it's a record, can't speak to anything before 1999)

* six adults attended camp (seven actually, two adults shared the time up at camp during the week and traded off on Wednesday).That was also a record for this troop (again, at least since 1999).

* we also picked up two more boys from Oakland that were added to our Troop as provisional scouts (having led provisional s 2 years ago, I felt it important that we invite these boys in to join our Troop, and I like the fact that the camp thought to ask us first if we'd take them in :).

* I learned how to sail a Hobie Cat and a Laser small sailboat this week. So did my son. I'm still not all that particularly good at it, but it was a lot of fun to get out onto the water and let the wind take us where we wanted to go.

* the boys earned 71 merit badges this week, which is an average of 4 plus badges per attendee. In addition, we also racked up the potential for 13 rank advancements (actually 15 since two boys are eligible for double headers (Tenderfoot/2nd Class and 2nd Class/1st Class). We also have three Boy Scout World Conservation Awards, one earner of the Mile Swim Award, and 23 boys and adults that earned the Finney Valley Award.

* Nick^2 now both qualify to receive Bronze Eagle Palms (both boys racked up five merit badges each this past week).

* I got to take our oldest attendee out on a Whitewater kayak trip down the Russian River (and let me tell you, rapids you would scoff at in a raft become a whole nother matter in a kayak! Exciting, yes, but I have a few bumps and bruises from this particular trip (LOL!).

* I dealt with the typical things that a Scout leader has to deal with when it comes to camp, including trying my best to follow up on boys and make sure taht they are where they need to be at a given time, dealing with minor feuds between boys, dealing with homesickness with some of the newer guys, and otherwise just making sure all of our boys make it home in one piece (which they did) overall happy (which they did) and having accomplished all they set out to do (well, OK, some room for imrovement there, but overall verty well done on all counts :) ).

So now it's time for me to adjust to life back home. It may take awhile (LOL!).
Posted by Michael Larsen at 6:00 AM No comments: