Some may remember last year that I said that I wasn't a really big fan of the "brag letters" that now tend to be a standard part of Christmas Cards. Part of me finds them a little obnoxious and self serving, yet as I look back at the year that is 2009, it strikes me that, well, we had one of those years that makes me want to crow a little bit (LOL!). We certainly had our ups and downs; it was a challenging year on a lot of fronts, but it was also a year where a great deal of noteworthy things happened to me and my family.

For me, 2009 would be a year of "rewinding". Of the many memorable things to have happened this year, none strikes a more surreal chord more directly than a company asking to release material my old band recorded between 17-20 years ago. Demon Doll Records signed us to a distribution deal where they now can release and sell CD's of High Wire's material. To add to that, all of us got together August 22nd and performed together for the first time in 17 years. It was a fantastic night and one I will honestly not soon forget!

I had the chance to serve as Staff on an LDS friendly Wood Badge Course. It took a lot of time and effort to put together, but I was happy to have had the experience, and I greatly enjoyed working with my group of Bobwhites, all of whom should be well on their way to earning their Wood badge beads (but I'm going to have to start checking up on them pretty soon :) ).

My son Nicholas earned his Eagle Scout award this year. To say that's an amazing accomplishment is an understatement. It's a big deal, and I'm really proud of him. I'm also really proud of the fact that he has put effort into learning how to play the Viola. It's fun to come home and hear him playing music for school, or holiday songs, or even more entertaining, the theme music to video games like Mario Brothers (LOL!). He's enjoying his lat year of intermediate school for the most part, but looking forward to attending High School next year (yikes, do I really have a kid who's about to go into high school?!)

Karina is growing into a beautiful young lady (see my previous post this month :) ), and her art skills are simply phenomenal, for lack of a better word. I always enjoy seeing what she has drawn, and what she wants to put together next. She's been working on an illustrated book about a girl and her dog for months... I'd love to say more about it, but she won't show it to me until its finished (LOL!). Karina is in 5th grade, and short of the usual drama that accompanies girls and friendships at that age, I think she's doing really well.

Amber is my joyous little imp, and it's so fun to watch her interact with everyone and see her grow up. She's a 3rd grader this year, and it's been fun to see her show her classmates her love of "Indian Dancing", drawing, and her love for the outdoors. It's also been funny to watch her take hold of a Winnie the Pooh bear that she will bring everywhere with her, and I mean honestly anywhere. It's really cute :).

Christina was released this year a the Primary President, a role she has had in the Church now for four years, and she now serves with the Compassionate Service Committee, helping make sure that new moms get meals, or helping out in ways that people need when they need additional help. I've enjoyed watching Christina grow into this new role, and become reconnected with the Relief Society after so many years in Primary. We both grew a year older this year, and celebrated 17 years of marriage on December 5th, punctuated by a Sushi dinner and watching an old friend's band play down in Cupertino :).

So 2009 is almost gone, and it's been fun to reflect on the year that was, and to look forward to a new, year, a new decade, and the many challenges and adventures that this new year will bring.
Posted by Michael Larsen at 6:58 AM 1 comment: 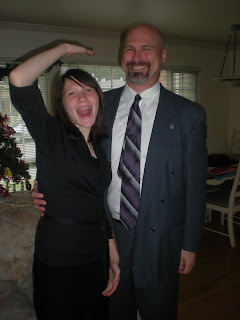 Sometimes in our mad rush to do stuff, we don't stop to think about the time that has passed and the milestones that are reached. Karina turned 11 two weeks ago. She's a fifth grader right now, and she is suffering from the same genetic anomaly I suffered from, i.e. "stork syndrome". Karina is taller than just about anyone in her school, male or female, so sometimes people look to her and think she is much older than she really is. It's funny, I sometimes fall into that trap as well. That's why I love the times when she acts all silly and cute to remind me that she really is still a little girl in many ways :).

We took this picture yesterday after we came home from church, and she's reminding me that she's as tall a Mom now and can wear all of Mom's clothes (which in some ways is very cute, and in others somewhat alarming). While I can admit my daughter is growing up, I'm really in no hurry for her to move the process along at any great speed, either (LOL!).