No Room In Heaven -- Available NOW!!! 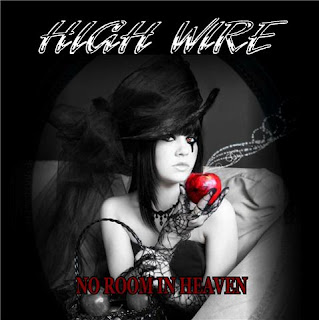 OK, first things first... "HIGH WIRE -- No Room In Heaven" is now officially available through Demon Doll Records. Right now, the only way to get it is through the record company's site, so if you want to order it, please do (but read the rest of the blog first :) )...

It is such a weird sensation to be able to write this today... 14 songs that my band recorded between 1989 and 1992 can now be purchased as a single CD. This was the result of a very unexpected turn of events back in December of 2008. An old friend of ours from the San Francisco club scene, Robbi Black of the now retired band Alleycat Scratch, contacted us and told us about a record label that he was working with. This label was dedicated to the scene that we were part of, the glam/hard rock/heavy metal scene (what is ubiquitously referred to today as the "hair band scene"). Robbi asked us if we would like to have a track on the record label's compilation album... "Glamnation, Volume 5". I got in contact with my former band members, asked them if they would be game to include the track, and we all agreed to do it. We figured that would be the end of it. Turns out there was more karma to come :).

Shortly after signing the agreement to include the song "No Room in Heaven" on "Glamnation, Volume 5", the label's president contacted us and said he'd heard our songs on our myspace page (which, by the way, is here), and wanted to know if we would be interested in a deal to distribute our old material as a full length CD. Well, since this was one of the things we all wanted from way back in the beginning of the band, we thought about it, and then said "yeah, we'll do it!". What followed was a couple of months of gathering masters together that had been dispersed and getting them converted to digital media (remember, 1989 was around the advent od the CD as a regular distribution medium; most bands still pressed vinyl or released cassettes, CD's were crazy expensive to produce). The process of getting these old masters and getting them ready for release was, honestly, a reclaimation project; our masters disintegrated through the rendering process, and now the digital files are the only masters left (20 years is rarely kind to acetate tape).

What was interesting about this process was that we let Demon Doll design a cover, CD layout and track order that we left up to them. While we were very familiar with our material, we were not sure as to what or how we would sound to outside ears, or how other would choose to package our songs. To be honest, I was a little concerned... the glam scene was not really known for subtlety (LOL!). When I saw the album cover, it took me a bit to realize what they were going for, but I like the styling a lot. As the label explained to me, they wanted to go with an almost Victorian feel with the cover model, yet still have it be current and hip by today's standards. It definitely has a "Gothic Lolita vibe to it, no question there. The red apple coloring on the B/W photo is also a really cool touch. The song order is roughly chronological, but they made some changes to how we originally released them and moved a few tracks to make for a better flow, as though it were all recorded as one album. I like the order they decided on, and for the most part, I like all of the tracks they chose to use (some more than others, but as they reminded me, I'm my own worst critic, and things I think are great or weak will get different reactions from different people. Overall, though, it is a balanced disk and covers our "career" accurately.

A word of warning to my LDS friends... these songs were recorded in a time and an era when I was not active in the church, so you may expect that there are some words and some topics that are a little less than "For the Strength of Youth" sanctioned. To be fair, we sound like the Osmond's compared to may of the bands of the time, but salty metaphors are to be found in some songs, and I throw an outright F-bomb in "Throwaway People" (though, to be balanced, the context was within an actual quote, but ye have been duly warned).

So here it is, 17 years after our last performance as a band, High Wire can be heard again, and for some, heard for the very first time. I'm happy that this project has finally seen the light of day, and that it can now be purchased (and yes, if you can hang with the proviso above, I wholeheartedly encourage you to purchase it :) ). For those who choose to get it, please drop me a line and let me know what you think of it. As to the material presented, let me borrow an oft printed line from Seal... "It was the best we had at the time" :).
Posted by Michael Larsen at 8:00 AM 6 comments:

Been Awhile, Time To Get Back In the Game

Sorry for the long drought between posts for those who enjoy reading this blog, but I needed to focus on some other things, and generally clear my head and get back into the groove of things. Some interesting things have been happening in my reality, many of them I'll be able to talk about in the coming days, but let's start with these:

* Nicholas turned in his Eagle Scout application last week. He's completed all of the requirements for the award, now he needs to sit for a board of review with the Council Advancement Committee. If he passes the board of review, he will be an Eagle Scout :). Here's hoping we hear news of a review quickly.

* I just finished my first course weekend as a Staffer at Wood Badge (WE3-31-09), and I have to say, I have a great Patrol (the Bobwhites are my group, and I had a lot of fun helping get them settled and develop the items for them to get into the spirit of the course and have fun with it). We convene again in 4 weeks to complete the 2nd weekend of the course. It's also been a lot of fun to have my friend Andrew C. be on course (Andrew is a Webelos Den Leader in our church's Cub Scout Pack. He's not part of my Patrol, but he's an Owl, and he has an awesome Troop Guide :) ).


* HIGH WIRE now has officially published material available. Our first foray into having our music published appears on the compilation album "Glamnation, Volume 5". Our Track "No Room in Heaven" is song number 5 on the CD. A huge disclaimer with this... many of the songs on this are straight up raunchy (which shouldn't come as any surprise to fans of 80's and early 90's hair metal), so if you are sensitive to such things, you may wish to steer clear or rip and edit your play list dramatically.

* HIGH WIRE will have their full length CD "No Room In Heaven" available to be ordered from Demon Doll/272 Records on August 22, 2009 if all goes according to plan (at least that was the last update that I received a couple of weeks ago). Once it's officially shipped, I will post updates on how to get the CD.

So there's a little bit of my immediate reality, more details on these topics and others as the days move forward.
Posted by Michael Larsen at 7:32 PM No comments: