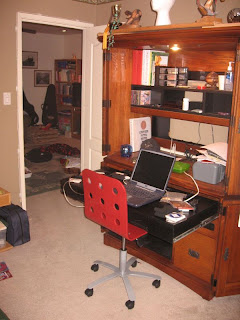 I think it's safe to say that we all have a spot in our lives that we either:

a. allow to be chaotic and messy to keep everything else together

b. one place just ends up being chaotic no matter how hard we try

In my life, there are two places that fit this bill. The first is (and has always been) the garage, but we have taken steps to rectify that. The second place in our house is the one that is much more troubling and more difficult to deal with. However, it's the one that gets to the point where it must be dealt with much more quickly than the garage. This is our "4th Bedroom", AKA my office.

Now, if this room were truly "just" an office, then it might be easier to deal with. Unfortunately, that's not the case. Due to some oddities in the way that our house was added on to by previous owners, the upstairs is a little unusual. The room itself has an odd shape. It's about 10' wide and about 12' feet deep, not counting the standard two door closet (which itself is about 5 1'2' wide and two feet deep). Add to that the fact that there is a bump-out that is four feet deep on both sides (to accommodate the staircase that leads upstairs to the addition), and you soon realize that this is a room that doesn't have a lot of options when it comes to actual floor and wall space. The bump-out does have an advantage, in that it has an extra single door closet space, but the floor of this closet begins two feet off the ground (again, because it needs to accommodate the stairway underneath, and having an angle in the room would have just plain looked odd).

Back when we first bought this house, this room served two purposes and two purposes only. It was my office, and it was where my music equipment went. It wasn't meant to be anything more than that. However, as our family grew and space for other items was needed, the closet became not just my closet for my clothes, but it also became storage for kids toys, family photos, video equipment, and all of the other things that families aren't sure what to do with. This of course spilled out into other closets, shelves, drawers, etc. Add to that fact that, at the end of the day, it just seems there's no place to put [fill in the blank], and it somehow ends up in here. Thus this room's life cycle is like an ocean wave, where the clutter and disorganization build up to the point where it forces action, and a flurry of activity cleans it out, but never 100%, because there's always something that needs to be taken care of and there's just never enough energy or time to completely take care of it, and then other areas of life intervene, and the room gets piled up again, and the cycle keeps repeating.

I actually woke up at 3:00 AM this morning with an urgent anxiety... I have to get a handle on this. It's ridiculous for there to be an entire room in a house that gets this treatment as often as this one does, but why is that the case? It's because of the multi-purpose and undefined notion of this room. It's an office, it's my closet, it's my personal library, it's storage for media, it's storage for scouting stuff, it's a spare bedroom/guest room... it's all of these things, but because we allow it to be all of that, often times it's none of those things, and more times than I care to admit, it becomes "that room where the door is never open, and the stuff is allowed to accumulate until we can't take it any more". Whenever people come over to our house and wonder that it is so clean, I always chuckle a little bit under my breath and think "just don't ask to see my office."

So how am I going to handle it differently this time? Here's my strategy: 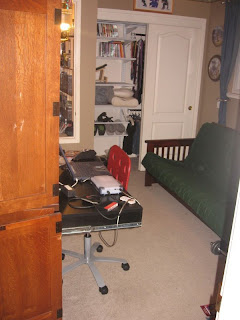 1. I have a closet that is set up for clothes, and thus, I have decided that, if it is not clothing related, it does not belong in there. Somehow an entire three shelves have become dedicated to DVDs and VCR tapes, because we have no place else to put them. 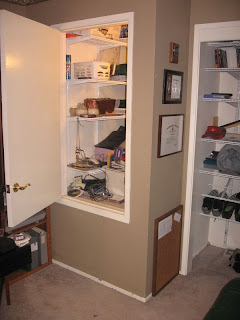 2. There are a bunch of items in the odd closet over the stairs, and their relationship to each other is very questionable. This closet is going to be designated as the "office closet", meaning office supplies and work related materials ONLY will stay in here. All other items will need to be relocated or liquidated.

3. There is a large futon in this office that often ends up being a holding place for [FILL IN THE BLANK]. The futon is not all that comfortable a place to sit, and it doesn't make for all that good a bed when it's folded out. On top of that, it's also rather bulky in its overall size for the room, but it's been of good utility when we have needed a place for someone to sleep (be it when a kid is sick or a parent is sick). thus, for the time being, the futon stays, but it needs to be designated as a couch or a bed, not a clothes rack, filing cabinet or some other purpose. 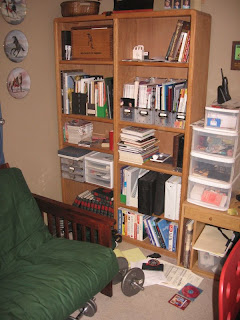 4. This room needs to have a "perimeter sweep". Just like the garage, if an item stands in front of another item, it's not in a good place and needs to either be relocated or liquidated. As this cycle repeats, I realize that "liquidation" is often the most appropriate action, but boy is it tough sometimes to actually do that.

And thus, the never-ending struggle with this room continues. Since I do so much better with things when I somehow "bare my wounds" for the world to see, this room will now be the focus of "Shedding of Innocent Stuff" until it is purged. Do I think this will be the final time? Unlikely, as I have said this too many times to count, but I know that with public recognition of a problem, action follows. Stay tuned for further developments ;).
Posted by Michael Larsen at 5:00 AM

good luck... When you are done head on down to AZ, you are welcome to tackle any room in our house... They are all in a state of disorganization...

Oh organizing the office sounds fun. Just not at 3 in the morning. You have so many great closets to work with. Looks like you got a handle on the organization on the bookcase for the most part.

We have a chair in our room and it is a clothes catcher too. How about a really nice Lazy Boy or Chaise instead of the futon? You could also buy a small media cabinet for the videos.

Okay, okay, I guess I'm getting a little too excited about the idea of how to clean the office.....

No, please, be my guest (LOL!). I end up doing a full sweep and purge (or what I feel amounts to one) every month or so. This time it was just especially bad; the pictures you see were at 4:45 this morning, almost 2 hours *after* I started dealing with it.

there are a few thoughts I have about what to do with this room. Some of them include removing the computer armoir, futon and bookcases entirely, and replacing them for better function (and perhaps forcing limits so that accumulations is not so easy).