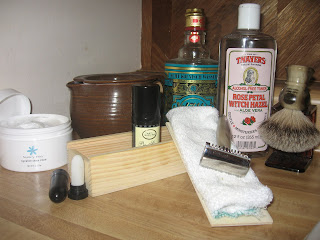 What you see above is my morning rig, and with one exception, it's as old school as you can get without owning a straight razor (and someday, I may actually get brave enough to try one again :) ). Last year at this time, I decided that I was going broke keeping myself in Edge Gel and Mach 3 blades, and after having read a few other bloggers comments about ditching the new and disposable stuff for the "classic" approach, I likewise decided to ditch my canned foam and Mach 3 razor, and went on a quest to find what all the fuss was regarding the "classic shave".

With a little encouragement and some research, I decided to go the DE (Dual Edge) route and invested in a Merkur Combed 1904 Safety Razor from Germany. I liked this one because it has heft to it and a nice, long horn handle. Just placing it on the skin and letting gravity do the work is all that is needed. I will have to confess that this was a splurge purchase, but it's made a lot more comforting in the fact that these types of razors will literally last generations. I've tried numerous different blades, and have had success with German Merkur Solingen blades (nice and clean feeling) and Feather blades from Japan (ridiculously sharp and require a delicate touch) but my favorite are Personna blades from Israel. What's more, it's possible to get packs of 100 of these blades for less than $25.00. That's a two years supply of blades, and literally pennies a day for a shave :).

I use a preshave oil from the Art of Shaving, and I find this to be a very helpful component to a morning shave. It's not essential, and it does add a bit to the cost of a shave, but it does make for a nice touch and a smooth glide. About $15-$20 per container, depending on which one you choose to use.

The big pot in the back is a neat device called a "Moss Scuttle". They are made in Canada by a potter that makes each one by hand (I heard a few rave reviews about these and decided to try one out. The classic scuttle is made for hard soaps, where the soap sits on a platform and water drains down into an inner chamber that holds hot water. What's cool about this is that this is designed to work with tube and tub creams, which are my preferred types (instead of holes, it's a solid cup, and the fill point for the inner chamber is small enough to fill with water, allowing the inner water to stay hotter longer). Fill the inner chamber with hot water as well as the upper cup, soak your brush in the upper cup, drain off the top level of water while keeping the inner water inside, Spoon off a half teaspoon of soap into the top cup, swirl up the cream, and you have a warm lather that stays warm for the duartion of your shave and just plain feels fabulous going on :). Cost of the item, $65.00 American.

My brush is Badger Hair, made by Vulfix, and it is large enough to be comfortable and efficient, but not so big as to be a mess to clean up. Plus, it fits the scuttle perfectly. The brush I have cost about $45.00, and like the Merkur razor, with proper care can also last generations.

This past year has been a quest to find a hard cream that works well with the Moss Scuttle, and I have found two that I love. The first is from Italy and it's called Proraso. It has a lanolin base and eucalyptus oil, and the second is made in San Francisco from a company called Nancy Boy. Their cream has a great consistency and feels terrific in the skin, but its real staying power comes from its fragrance, a mix of Lavender, Peppermint and Rosemary essential oils. It may sound like it would be overpowering, but it's not. A tub of each costs about $15.00, and for face shavers, a tub will literally last you a year of daily use.

The little stick is barber's alum, and is used for the ever essential "nick" treatment that you have to deal with every once in awhile (no matter how good you are at shaving, nicks are inevitable, but alum block takes care of it quickly). I got this stick as a Christmas present, but an average 100 gram block costs about $6.00.

The area that you can go absolutely nuts on is after-shave; there are so many choices out there and different varieties. I tried several and found one in an unlikely place. A friend recommended that I try Thayer's Witch Hazel and Rose Water tonic as an after shave, and I gotta say, I think it works great. What I really like about it is that there is no alcohol, so it cools down the skin, and emolliates without burning, while using the witch hazel to act as a final antiseptic to protect the skin. A 12 oz. bottle goes for about $9.00.

Finally, the last little touch that I have used for years and years (and is my favorite "fragrance" of all time) is called "No. 4711" from Germany. as you might guess, this is made in Cologne, Germany, and it's where the phrase "cologne" comes from :). Nice citrus based scent, never overpowering, and the bottle I have has lasted close to a decade and will probably last me into next decade. I have no idea how much I paid for the bottle I have now, but I consider it a bargain for how often I use it and how long I've used it.

So I'm sure that some are scratching their heads wondering why this is a Madd Money entry. Doesn't seem to be very "frugal" on the surface, until you take a closer look. The costs of setting up this rig will take me a year to recoup the setup costs (mostly in the cost of the razor, scuttle and brush) but those items will last indefinitely. With the cost of the Personna blades, and the price for the cream and other items, it actually costs *less* that buying the current blades and foams that are disposable. Even with the lower cost, the real reason I love this rig is the fact that shaving, which used to be a total chore, is now something I truly look forward to doing. That change alone made the investment worth it :).
Posted by Michael Larsen at 5:00 AM