Last Saturday, while I was away for Wood Badge Course Development Weekend, Nick arranged to have a few friends, family and helpers come to our house and drive throughout the neighborhoods surrounding us to pick up the items he hoped people would donate.

Nick made 1000 fliers that were distributed through a number of San Bruno neighborhoods the previous Saturday. The request was for items that would help the Peninsula Humane Society and their mission to help care for stray, injured and abandoned animals at their shelter. The crew below answered the call and much thanks to them (and a few others who are not pictured) for giving up a part of their Saturday to help Nick gather up the items: 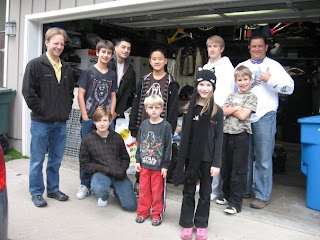 Groups of two boys with an adult and a car/truck went out to go and gather up items that were on the curb in front of houses for this drive. To be honest, I wasn't sure how this would turn out, and not being there when it happened, I was all sorts of anxious while I was up at Course Development Weekend. Around 4:00 PM on Saturday, I had the chance to check my phone and see that I had a Voicemail message. As I listened, I heard the following (paraphrased)...

"Hi Dad, it's Nick. We've finished the Eagle project and... the garage is FULL! Seriously, you can't walk in here right now, it's a pile about three feet deep and covers the floor of the garage. So yeah, it was a success, and we have a lot of stuff. See you when you get home!"

When I got home Sunday afternoon, This is what awaited me: 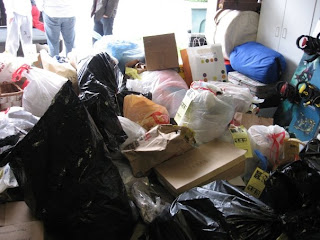 Now, the collection phase is over, but there's still a lot more that Nick and others need to do. The materials need to be sorted, categorized, and condensed, where possible, and then need to be delivered to the Humane Society office. Oh, and then there's that little element called a "write up" that has to be done so it can be turned in, approved, and signed off. But overall, Nick has done very well with this project. Granted, he handles some things in ways that I personally wouldn't, and I try to make suggestions here and there (as does Christina) but it's important to let him drive this, and drive it in the way that he feels is best. If we do everything for him, it doesn't meet the requirement of a youth led and managed service project, so we have to appreciate that he'll do thing in certain ways, and we have to accept that (infuriating as it may be at times (LOL!) ).

As I close this missive today, I want to share one more picture. This was attached at one of the pick up locations by a Girl Scout troop that pooled together their contributions. I thought their leaving this sign as a way of encouragement was terrific, and I plan on keeping this as a part of his project to show him that people he doesn't even know are rooting for him and hope that he succeeds :). 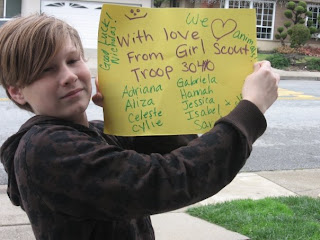 Posted by Michael Larsen at 5:00 AM