My Jumong Journey is At Its End 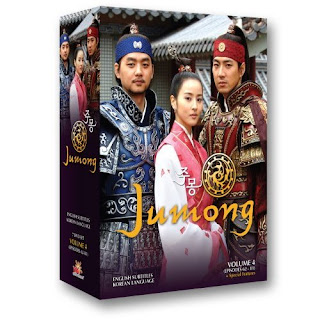 81 episodes, 81 hours, and an absolutely unforgettable ride. Gorgeous from start to finish. Really, there's nothing more to be said other than that.

When Tom introduced me to this series, I had no idea it would have as big an impact on me that it has. It is a wonderfully epic tale, and one that is totally worth watching. I feel as though I have a greater appreciation for the history of the land whose movies I enjoy so much. In addition, I also have a feeling of greater appreciation for the television series that are made in Korea (as I said previously, I've really only paid attention to Korean movies. This was my first experience with a full fledged national K- Drama).
I wonder what I will do with myself now that it's all over, but seeing as I have a house that's changing color, a Labor Day Weekend Pow Wow to attend and other areas of my life that need some focus, as well as a wife and kids that probably would love to spend some additional time with me, I'm sure I can think of something (LOL!).
To fans of the "Korean Wave", check out this series. While you are at it, show some love for Ya Entertainment and drop them a line saying "thank you" for bringing programs like this state-side.
Posted by Michael Larsen at 7:00 AM