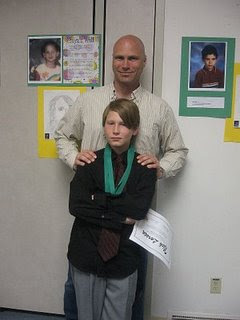 As many may know (and some may not), twelve is a significant age in The Church of Jesus Christ of Latter-day Saints, for both young men and young women. First, officially, my son is now considered a "Young Man" in the church. Second, at the age of twelve, Nicholas is now eligible to receive the Aaronic Priesthood and participate in the physical ordinaces that our church performs. Looking back to when I was twelve, I remember a certain excitement to being able to pass the sacrament, being able to participate in youth trips to the Oakland Temple for temple baptisms, and being able to join the Young Men's program and priesthood meetings where all of the "big guys" hung out. I'm hoping Nicholas has a similar feeling of excitement.

So much has happened since we brought a litle pink bundle home from the hospital in August of 1996. At the time, we were living in a house in san Francisco's Richmond District, and we were honestly a youngish couple who were ready to have children, but not entirely prepared for the changes in our life that would come with it. We learned, of course, and we had our moments of struggle (sleepless nights, concerns over health, irrational fears, etc.) Fortunately, we realized that kids are pretty resilient, and that they are able to thrive with a litle help from a loving family.

Watching Nicholas grow and develop over the past twelve years has been a fun, interesting and occassionally stressful experience. For the most part, he's a pretty awesome kid. He has traits that can get on my nerves, but then, that's because I see many of those traits in myself, and I know how they can affect one's life. Some cool traits my son has, however, deserve to be mentioned:

* Nicholas is an easy kid to get along with, and he has no problem making friends

* He enjoys reading, learning and having new experiences

* He's tenacious when he finds something he enjoys doing, though finding that thing that he enjoys seems to be hit and miss at times

* He is fun-loving and finds pleasure in many simple things

* He is genuinely a good brother to his younger sisters, and he enjoys actively playing with them

* He has been a conscientious Cub scout and Boy Scout, and does strive to be a good example to other boys in the program. He's gone a long way in a short amount of time.

* He enjoys a lot of the same things that I do (snowboading, outdoor activities, manga and anime, tweaking computers, etc).

* He gets high marks from his various Sunday School teachers, in that he pays attention, provides good comments, and seems to "get it" when gospel principal are discussed in his classes. Application needs some refinement, but hey, the same could be said of all of us at times :).

* He's developing an appreciation of various different kinds of music, and isn't afraid to voice his opinion about what he likes and why, and what he doesn't like and why (general rule in our house is that all music is in the open, and all music gets filtered through mom and dad. Net result is that we have a lot of discussions regarding music and what makes it subjectively good or not. Nick is holding his own in many of those conversations now (as a former professional musician, that brings a smile to my face :) ).

I could go on and on about how proud I am of my son as well as all of my kids, but suffice it to say I just felt like giving a little time to write down some thoughts of my little guy, who's becoming not so little each day.

Happy Birthday, dude!!!
Posted by Michael Larsen at 7:12 AM