Jumong Fever Still Has a Hold On Me 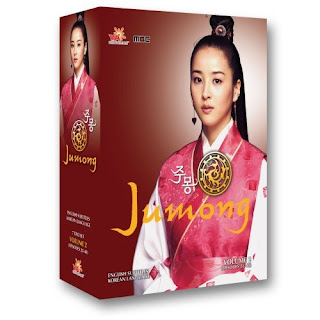 This volume covers Episodes 21-40. I received it in the mail last Thursday. I'm already up to Episode 37.

For those who are curious as to what this whole series is about, the story as told (actual history and the drama as portrayed vary a little) takes place around 80 B.C., during the period of the Han Dynasty in China, and their expansion and military conquests in the areas known today as North & South Korea and Manchuria. It is the story of Jumong, son of Haemosu, a military hero to the Ancient Josun migrant population (the Kingdom/Empire the Han brought to a close) who is captured and believed killed. Haemosu's best friend and comrade, Prince Kumwa, takes in Haemosu's love, Lady Yuhwa and her new son, Jumong. Kumwa becomes King and raises Jumong in the royal court of Puyo (one of the contested lands under threat by the Han Dynasty) as his own son. The story revolves around Jumong coming of age and fulfilling his destiny, changing from a spoiled and cowardly noble into a legendary hero, one who would ultimately unite tribes, repel the Han, and establish the kingdom of Goguryeo (from which we get the Anglicized word "Korea" today).

The story is geting really good now. Lots of crazy twists and turns at this stage, and an even greater desire to jump headfirst into Volume 3 (which I now need to get, and hadn't anticipated needing this quickly... I've really got to slow down my consumption of this!).


I think this is the point where I confess to the world that I should probably seek psychatric help (LOL!).
Posted by Michael Larsen at 9:44 AM