Is Samurai X OVA “Trust and Betrayal” Really The Best of The Best?!

A few days ago, I commented on the fact that I came across what I felt was one of the best anime series I had not yet seen, Wolf’s Rain. I freely admit to being a dilettante when it comes to anime; I’m not a rabid fan, and I do not wait in line to read and scour the news of every new title, or even classic titles that I hear about. I like what I like, come across what I do often by chance encounters, and oftentimes, what I like doesn’t always follow public taste or even popular interest. I freely admit to being an outlier fan of things that many others either don’t like or they wonder why on earth I would be interested in [fill in the blank]. Case in point, my girlfriend in college was the one who turned me on to ElfQuest, and for many years I was a huge fan of that series. I can’t claim to be an original fan, or one who necessarily knew every nook and cranny about it (though I did know a lot about it :) ). I also realize that it was not a really “cool” title to dig if you were a late teen or early 20 guy in the 1980s, but I liked it because I liked it, and that was enough reason.

In my quest for Anime titles and other such things, I occasionally look to rating sites, or to forums, just to see what other people find interesting, and to see what strikes people’s fancy or makes them react a certain way. I also often see that titles I like a lot may not rank highly, and titles I’ve never heard of or know little of or haven’t sought out rate way up there. Every once in awhile, I want to find out if there’s something I’m missing, something that will astound me or make me really take notice. Thus, when I started looking at some ratings sites and looking at different weightings and ratings, one title stood out time and again with the most representative votes as being considered, possibly, the best of the best. That title was “Samurai X: Trust and Betrayal”. 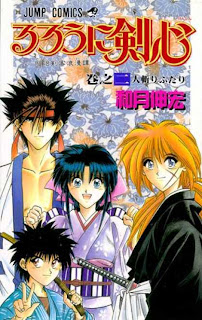 Now, for those who are curious... Samurai X is a pseudonym for the character of Himura Kenshin, and he himself is the protagonist for the often goofy and cute anime and manga series “Rurouni Kenshin”. With RK’s somewhat cutesy style and simple, classic anime elements, it comes across as a sometimes light-hearted telling of a Ronin samurai’s life after his time and era have passed (RK takes place in the era just after the close of the Tokugawa Shogunate and the rise of the Meiji restoration, when, effectively, the class of samurai was made obsolete and allowed to die out in real world Japan). Again, having seen a few episodes of RK, it was a cute series, but really, I wasn’t quite sure where people were coming from when they would consider “Samurai X” so highly. Was I missing something?

The answer is “yes”, in a big way. If you take a look at the style of animation for “Rurouni Kenshin”, it’s the fully “Kawaii” cute style of so many television anime productions, the style made famous by shows like Ranma ½ and Azumanga Daioh. Samurai X, on the other hand, goes for a much more real look, striking in its difference from the televised anime. In addition, the character of Kenshin is never portrayed as cute or silly; here the story is grim and focused, and it is also gripping. Where Rurouni Kenshin may have played to teens and young adults, Samurai X is clearly developed to appeal to an older audience. It’s high drama, and with a story beautifully told. There are two OVA’s in the Samurai X series. The first, Trust and Betrayal, is the prequel to the events that take place in Rurouni Kenshin. The second, called Reflection, takes place after the events of Rurouni Kenshin. In Trust and Betrayal, we discover what led Kenshin to become the swordsman that he ultimately became, the politics and the machinations of the ending of the Tokugawa era, and the bittersweet story that foreshadows the events of Rurouni Kenshin, and answers the question “where did he get that X shaped scar on his face”?

Again, those expecting to see a light hearted romp akin to the anime series will definitely not find what they are looking for here. However, those interested in a rich and beautiful depicted story, albeit highly on the “graphically accurate” side, will find much to like here. For those who like their anime real, with deep character, honest storytelling, and a minimum of added gimmicks, and where the artwork is absolutely breathtaking, definitely see this. For those wondering what to get me for my birthday or Christmas, if anyone wants to surprise me with Samurai X: Trust and Betrayal, I’ll be overjoyed :). Does it rise to Best of the Best? Well, that’s a subjective thing anyway, but I can say this much… it’s definitely way up on the excellent meter. I can certainly see why so many people do consider it so highly. If you decide to watch it (or have already seen it), let me know what you think.

Posted by Michael Larsen at 6:00 AM