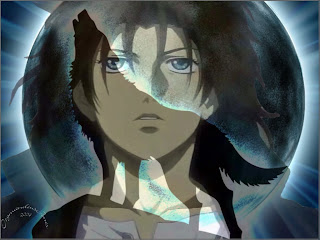 Somehow I missed this one the first time it came around, but in my quest for searching for new titles to see and enjoy, I came across what has become one of my favorite shows in Anime, and felt like sharing it here and my reflections of it.

"Wolf's Rain" is the story of four wolves. In this world, Wolves have been hunted to the brink of extinction. To survive, the remaining wolves have found a way to take on human form, or at least to appear human to most of the people that see them. The goal of the series, and the story arc, takes these four wolves as they travel a war torn and life weary world as they search for "the Flower Maiden" and open the gate to Paradise, a place where the wolves can live free and renew their war torn world.

OK, first, this series is visually stark, frightening, and beautiful, all at the same time. It's a production by Studio Bones, who have done a number of other gorgeous Anime titles as well (RahXephon, Fullmetal Alchemist, and Eureka Seven some prime examples). The series is encapsulated in 26 regular episodes, plus four additional OVA episodes that extend the story arc. With the exception of four re-capitulation episodes (used as a recap method in the middle of the story, telling the preceding events from the perspective of the four main characters) the series moves along very well and each episode is enjoyable in its own way, and often for different reasons. We see both wolves and humans dealing with very real problems and very real emotions in ways that are both believable and redeeming. It's an Anime, so it takes some dark turns here and there, and the story can be pretty grim at times, but it is also hauntingly beautiful and satisfying if you stay for the entire ride.

For me, the music of an Anime is just as important as the story, as often much of the music used in Anime comes to be part of my regular listening. In the list of composers that have become part of my everyday musical repertoire, none hs had the impact or staying power that Yoko Kanno has had, and here she does not disappoint. The opening and closing themes are both beautiful, haunting and mesmerizing in their own ways. The opening theme song, "Stray" has a Seal vibe to it, and it's a song I enjoy listening to as a standalone title. The ending theme, "Gravity" is also strikingly beautiful. Once again, Kanno shows how varied and skillful her musical talent is, and how well she blends in with the titles she scores.

So with all that, concider this a huge two thumbs up for Wolf's Rain. It works on a lot of levels, and it ultimately a very redeeming and beautiful story told from a perspective of what is ultimately a Shinto and Buddhist world view put to images and music. Here's hoping you may enjoy it as much as I have.

Posted by Michael Larsen at 6:00 AM

I like the story of Wolf's Rain, and this is really awesome to see, i like it in animated because i like animated movie and show.