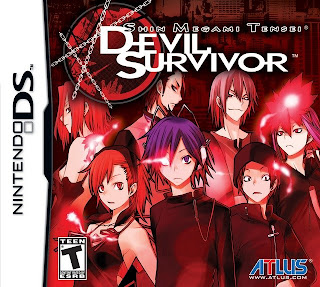 Back in March, my company gave me a really cool 4 year anniversary gift; a $150 gift card for GameStop. My co-workers know me well, what can I say (LOL!)?
The last title that I purchased from this was Suikoden Tierkreis, and I posted about that last month. A couple of weeks ago I picked up a new installment in one of my favorite long running game franchises, the ATLUS juggernaut Shin Megami Tensei (hereafter referred to as MEGATEN).
I love MEGATEN story lines because they tend to do away with most of the stereotypical Medieval trappings of fantasy and role playing games; MEGATEN games typically revolve around occult and cyberpunk aspects, mixing a little bit of horror, and a little bit of fantasy, and a bit of modern, current Japanese culture (Anime and Manga standards abound in these games). MEGATEN games also blend myth, legend and faith elements from many different cultures (Graeco-Roman, Norse, Celtic, Judeo-Christian, Egyptian, Chinese, Hindu and Japanese lore all make their way into the storylines) with the prominent use of "Akuma" (English translation would be "Devil" or "Demon"; the Greek idea of a "Daemon" is perhaps more accurate) and in the games you either instill yourself with their power, or you recruit them to your cause. You as a character develop skills for yourself and the Akuma, or you fuse individual Akuma together to create stronger or more skilled Akuma. The games are often morally driven, where your choices and your attitudes determine how the story flows. Also, one of my favorite aspect of MEGATEN titles is that things are rarely what they seem.

This brings me to my current installment, MEGATEN Devil Survivor. The story is classic MEGATEN; you and a few of your friends have decided to go shopping in downtown Tokyo on an afternoon. While doing so, the Government of Japan imposes a lock down in the area. No one comes in, no one goes out. You and your friends are stuck in downtown Tokyo, with strange creatures appearing in various places (Akuma), with a hunger for humans. You have two choices, get killed or fight back. One of your friends has given you and your team a device... it looks a lot like a DS, but it has special capabilities... one of them being the ability to make contracts with Akuma. Now, instead of fighting Akuma alone, you can enlist them to fight with you. All the while you realize that things are developing rapidly, you have little time, and the Japanese Government knows that the people in the Tokyo loop are in great danger, but they are not going to do anything to help. If you want to survive, and if you want to save the countless people trapped inside of the Tokyo loop with you, you must take out the threat that's trapped within the Tokyo loop with you... and here's where I'll shut up and let those that want to play the game take it from there :).
This is the first MEGATEN game to be available in the DS format. It is not a dungeon crawler like so many of the other MEGATEN titles that have preceded it, where you search for relics or items, have encounters and cover a world map with actual movement. This title is menu driven, with many areas having similar components; look around the area and get a text blurb about what's happening. Listen in on conversations and get a fast overview of the situation. Talk to your team mates and to people directly identified as protagonists or antagonists. The information gathering elements of the game can be performed very quickly, so that you can focus on the important stuff, like recruiting Akuma, crafting their abilities and practicing those abilities in strategy based battles. Battles are designated as such, and usually are one-off situations, with various areas around Tokyo designated as "Free Battle" areas. Yes, this is an SRPG, and if you want any chance of surviving certain battles later in the game, you have to spend some time doing free battles and leveling up. The battle system uses a grid overlaid on scenery and feels a lot like many other SRPG's on various platforms. If you have ever played Suikoden Tactics or Final Fantasy Tactics, the battle system will feel very familiar. You have strengths and weaknesses, your Akuma have strengths and weaknesses, and opposing Akuma also have strengths and weaknesses. Exploit and outmaneuver your opponents and you win. If they exploit and outmaneuver you, well, you die!
Some interesting elements of the game include an email interface (you don't really get live editable email, but you can interact with it directly and send replies (canned) to other party members, and your replies can help shape the story to a degree). You receive messages telling you what potential things will happen. You can join the Devil Auction where you can make contracts with Akuma and get them to join your side. You can take two Akuma and fuse them together and make new and more powerful Akuma (or in some cases, less powerful Akuma... you have to pay attention to what you are doing).
In some ways, this is MEGATEN meets Yu-Gi-Oh!, as it feels like as lot of the encounters and aspects of them are very similar to that type of play, only instead of a one to one and single face off, you have chess style battles between 3-3 groupings, and a win/lose based on taking out the entire party or the leader of the party. There's a fair amount of "grind-up" to be done, and exactly how much you want to do is left up to you (encounters are almost all luck based if you are lower than the targets, somewhat challenging when you are on-par, and ridiculously easy if you get to be 3-4 levels over the targets... of course, these encounters give you a lot of practice trying out different Akuma and skill combinations, so they do not feel tedious. Well, at least most of the time they don’t :).
One interesting element about this game is that there is no active timer. Nowhere in the game does it tell you how long you have played, just that the story has progressed a certain point. Certain events move along the clock, but free battles do not, so you can spend *hours and hours* doing free battles. Thus, I have no way to tell how much of my life has been sucked into this game... good or bad, you decide (LOL!).
In short, this is a fun entry in the MEGAverse, and I love the fact that it’s for the DS, meaning I can take it and play it anywhere, instead of just when I have a few free moments at home (which, frankly, are getting to be rarer and rarer now that my kids are older and play console games, too). Still actively playing, late into day three of a seven day arc, so I'll post another entry when I finish... can't promise when that will be, but if past games are any indication, expect a follow up entry in about two months (LOL!).

Late Add-On: It's my Dad's birthday today. Please join me in wishing Spencer Larsen a happy 69th birthday (not sure if he'd have a problem with me outing his age like that, but knowing my dad, I doubt it highly :) ).
Posted by Michael Larsen at 6:00 AM