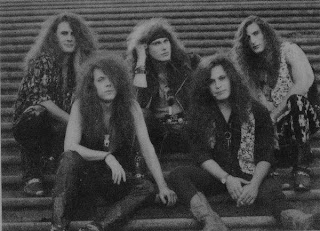 Well, this will require a bit of 'splaining, but it's been an interesting turn of events, and I figured this is a good a place as any to spell out what has been happening the past few months, and what will continue to happen in the coming year (or years :)?).

Back in December, I received an email from an old friend who played in a band called Alleycat Scratch. We often played at similar venues and also shared the stage at times. This friend now works for an independent record label down in Southern California called Demon Doll Records. Demon Doll specializes in putting out material from our shared genre (i.e. an emphasis on glam hard rock from the late 80's and early 90's). This label has a compilation they put out called "Glamnation, volume (n)" and at the time of the email, they were prepping to release Volume 5. It was through this cycle of releases that we were contacted and asked if we would like to have our material appear on the compilation. I explained that I was not actually able to make that decision by myself, but I would get in touch with all of my former band mates and see if they were willing to do it.

The month of December saw me put on my detective's cap and hunt down my old band mates. Facebook proved to be invaluable in this process; lo and behold, all but one of my band mates has one. The last holdout I found through talking to some friends, and as we all bantered about and discussed this opportunity, we all realized that, yeah, we'd love to have the chance to have the material that we wrote be published. So we all said yes, we signed a contract to allow them to use the song and pay us a royalty for the use, and that was that... or so we all thought.

Earlier in January, we were contacted by the president of the label and asked if we would like to have an actual full length CD released of our material. We all thought it sounded interesting, so we said "let's see the terms". Basically, it's a standard two year deal in which they own our material and will release it on CD an other venues, and in return we get paid a percentage of sales and a mechanical royalty for any and all songs sold. After we all had some collective comments to the effect of "OK, what year is it?!" we agreed to sign and turn over our tracks to be released. The final paperwork for this was finalized last Friday, February 6, 2009.

It's been a surreal few weeks, one in which a lot of odd feelings have come to the surface, and a lot of great conversations have been held. These guys were like family to me at one time, and it's great to see that there is still a lot of that feeling still there. It's also going to be great to have an actual tangible CD that I can point to and say "See this? This is who we used to be, and this is what we did!" In a way, it finally legitimized the years I tried to break into this business. Am I under any illusions that this is going to be some big break or a shot at stardom? No, I have no illusions in that area. Mostly, I'm just excited that someone other than us took an interest in us and said "hey, you know what? There may be a group of people out there that would like to buy your material, and we'd like to put it out." What's more, it may also be a chance for all of us to get out there and play again (perhaps sometime in the August 2009 time frame.

I guess we'll have to see what transpires from here, but as I've been saying in many other places regarding this unique and interesting turn of events... here's to future days :).
Posted by Michael Larsen at 5:00 AM

Oh Congratulations! This is exciting news. I would love to hear some of your tunes.

Erika, I edited the entry and there's a link under the picture to get to the MySpace page wehre some of our songs are.

Otherwise, head to http://www.myspace.com/sfhighwire and listen for yourself :).

Wow, that is pretty darn cool, only which one are you in the photo? I can't wait to go click on the link and hear your stuff. . . I loved the 80s hair bands. . .