About a year and a half ago, I made a deal with a co-worker of mine to buy a portable DVD player. Now, I had considered this to be a sort of ridiculous luxury, and I debated with myself if I would ever really use this thing. Since it was used, and since it was purchased by said co-worker for the express purpose of keeping him occupied for a round trip flight to Buenos Aires, I figured the price asked ($150) along with the relative newness of the model in question (Panasonic DVD-LS82) that it might be a good deal overall and, hey, I might actually get some use out of it. 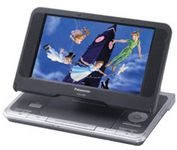 Well, a year and a half later, I can say that dollar for hour of use, this has turned out to be one of the best value purchases I have ever made, in that I actually use it almost every single day. It’s generally my companion on the BART train to and from work, plus it makes curling up in bed with a movie or a documentary very easy to do… some may debate whether or not that’s a good or healthy thing, but so far, I have no complaints :).

Still, I’m a bit of a stickler when it comes to the movies I buy, rent or see. I have unusual tastes in entertainment, and most of Hollywood’s fare leaves me cold, meaning I’m leery to buy DVDs outright unless they really fit a particular interest or I know that they are transcendent films that I’ll watch over and over. For instance, my top five movies:

Are ones that I own outright and am glad to own them, since I know I will watch them again and again.

Others, ehh, I may watch once and genuinely not be interested in ever seeing them again. What I dislike slightly less than buying a dud DVD is renting a dud DVD. I’m all for taking chances here and there, but most of the time, I’m not even willing to go the route of renting because I’m just “not feeling it” with a lot of titles. So what’s a guy to do when he has a portable DVD player, an hour a day to work with, and wants to expand his interests and motivation to see movies he might not otherwise see? San Bruno Public Library, to the rescue!!!

What I love about my public library is that they have *lots* of different titles from sources I might not see at the typical video rental place. Since it’s a public library, they have a *great* selection of movies based on literary works (if you are an Agatha Christie fan, a Jane Austen fan, or dig just about anything ever produced for the BBC, the library is a gold mine for these types of titles).What’s even better, it costs *nothing* to get these titles on loan for a week.

This past week, I decided to treat myself to three movies that I’d been curious about, but otherwise either didn’t feel like buying outright, or hadn’t had a chance to see. Two are from Japan, and one is from China.

“The Castle of Cagliostro” (Hayao Miyazaki’s 1979 feature film co-writing and directing debut, based on the Maurice Leblanc stories of master thief Arsene Lupin, and has long been on my list of movies I’ve wanted to see but somehow never got around to seeing. For Miyazaki fans, this shows his work before he founded Studio Ghibli).

“Cowboy Bebop: The Movie (Knockin' On Heaven's Door)” (a 2001 standalone feature length film from the ground-breaking, off-the-wall Japanese anime series, of which I happen to be a huge fan… yeah, I’m just as amazed that I’d never seen this one, either) . “House of Flying Daggers” (an absolutely gorgeous 2004 Chinese “wuxia”, along the lines of “Crouching Tiger, Hidden Dragon” and “Hero”, though it’s so much more than its genre would indicate; you don’t have to be a fan of martial arts to enjoy this movie, though if you are, you will certainly not be disappointed).

Now, I have to get some ideas for what I’ll be checking out next week. Personally, I think I’m going to dig a little more into the Korean movie section (both because I tend to enjoy Korean wave movies and I want to give myself ammunition to study and learn Hangul... but that's a topic for another post :) ). Who knows, this may become a regular part of this blog, but don’t be surprised if the titles I talk about are somewhat out there. That’s just the way I roll (LOL!).
Posted by Michael Larsen at 7:41 AM

Wow ! I got pulled into your entry on the strength of The Castle of Cagliostro and then I noticed you have the same name as my cousin. Same spelling. Yeah.