One of the longest tenured ongoing activities in my adult life, second only to my being married, has been in my role as an Adult Leader in the Boy Scouts of America. I have a near fifteen year tenure as an Adult leader; I started as a Cubmaster for Pack 92 in San Francisco in August of 1993.

The Scout Troop had, up until yesterday, 10 active boys under the age of 14. Last night, we added our eleventh, boy. Keaton earned his Arrow of Light award last night and for the occasion, "Nick^2" (pronounced "Nick-squared" as it consists of my son Nick and his close friend, also named Nick), serve as characters for the Order of the Arrow Ceremony held for Arrow of Light recipients. 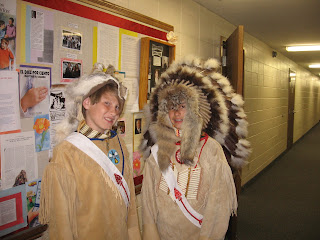 I made the regalia that the boys are wearing specifically for them. All of the Lodge regalia that we have is made for six foot tall guys. They would have drowned in the clothes, so rather than have them swimming in huge pieces, I made brand new leggings and war shirts that were sized specifically for them. They are not elaborately decorated at the moment, but that will come in time. I told them I’d add new items to the pieces each time they performed a ceremony in them. 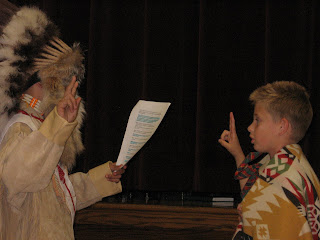 This was Nick^2 first experience as Ceremony team members, and I was very proud of both of them last night. I think they helped give Keaton a memorable ceremony. There's still some work to do before the boys become totally proficient, but all in all, an excellent first outing. 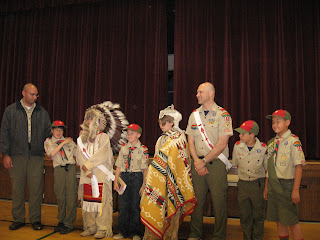 Welcoming Keaton as the newest member of Troop 250
Posted by Michael Larsen at 8:05 AM